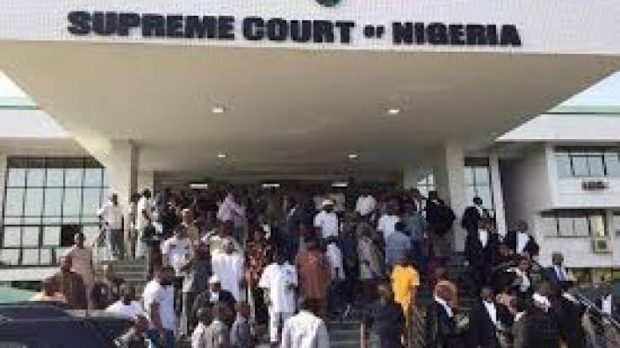 The Supreme Court on Monday adjourned till Tuesday (today) the hearing of 13 appeals filed in respect of governorship tussles in six states.

The adjournment followed an announcement by the Chief Justice of Nigeria, Justice Tanko Muhammad, leading a seven-man bench, that one of the members of the panel was ill.

The CJN said the court needed to “abruptly rise” due to the unnamed judge’s ailment.

The adjournment cut short the hearing of the first appeal already being taken. The appeal being heard was on the governorship contest in Kano State.

The Independent National Electoral Commission’s lawyer, Joseph Daudu (SAN), was to adopt his briefs of argument, when the CJN made the announcement.

All the six other members of the panel were seated with the CJN when the development was announced but the ailing one among them was not identified.

The panel was expected to resume sitting but after about an hour, the Director of Litigation of the Supreme Court, Mr Ibrahim Gold, declared that all the appeals had been adjourned till Tuesday.

Until the adjournment of the cases on Monday, many expected that the ailing judge would either recover or a replacement among the other Justices of the Supreme Court would be brought for the proceedings to continue on Monday.

It was the second time the CJN-led panel would rise abruptly on Monday.

Before the second suspension of proceedings attributed to the ailment of one of the panel members, the panel had earlier risen due to the rowdiness of the courtroom.

The CJN had to lead the members of the panel back to the chambers shortly after arriving the courtroom, ordered that crowd in the courtroom be reduced.

Listed on the day’s case list were 13 appeals and cross-appeals relating to the governorship tussles in Kano, Imo, Benue, Plateau, Bauchi and Sokoto states.

The cases paraded over 40 Senior Advocates of Nigeria, who were to appear in the different cases.

The premises of the Supreme Court played host to a huge crowd of supporters of politicians from the various states on Monday.

There were clashes among rival political groups on the premises.