Malami’s Purported Ban On Amotekun A Call For Anarchy – COSEG 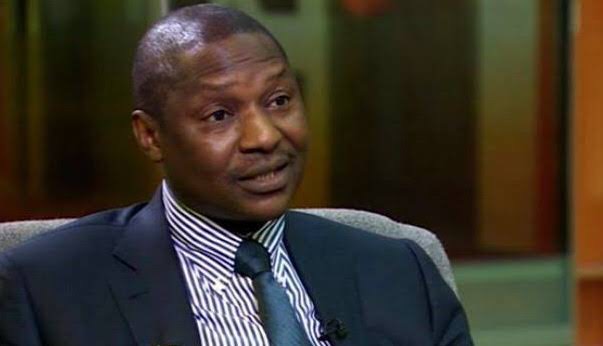 The Coalition of Oodua Self-determination Group (COSEG) has received the purported ban of AMOTEKUN by Minister for Justice and Attorney General, Mr. Abubakar Malami as a direct call for anarchy.

“This call is hilarious and reflects a publicly orchestrated conspiracy to undermine the collective safety of the Yoruba people and their land. This primitive plot is further shrouded in ethnically hatched agenda to create chaos, make Nigeria a more fragile state that is a breeding ground for total anarchy.”

The above statement is contained in a statement jointly signed by two leaders of the group, Corades Razaq Olokoba and Taiwo Otitolaye and made available to the press in Lagos Wednesday.

“We are unreservedly in support of our governors for the proactive steps to put together AMOTEKUN, a community policing outfit to ensure the safety of our people. We make use of this opportunity to make a plea to our governors not to give in to conspiracy and deliberate attempt to scuttle their noble actions. You have acted in line with UN Resolution Article 51. Under customary law, anticipatory self-defence is permissible when the threat of an armed attack is ‘imminent’. The Charter codifies the pre-existing customary rule of self-defence. The intention of Article 51 makes anticipatory self-defence a statutory right, not to limit it.

“The Nigeria security system has demonstrated that it has no answer to the recurring kidnapping, rape of our women, killings of farmers, and other societal ills that ravage our land, hence AMOTEKUN was even long overdue.

“More worrisome but laughable is Malami’s boldface of drumming colourful ethnic gongs and marimba bigotry. Malami can close his eyes to Isbah of the 12 northern states, the Civilian JTF in the north east but is now issuing an unconstitutional, malicious, divisive, but nevertheless meaningless and unenforceable ban on AMOTEKUN.

“If wishes were horses, Malami would hang around himself white albatrosses as a mark of victory over his evil plan to see the killings in Yorubaland and other regions go on and on; but delighted to support the same arrangements in the northern states.

“We in COSEG have long stated that the Nigeria project is a failed project. We can no longer watch the destiny of our people degenerate beyond this level.

“Our gains as a people under the regional government of the Action Group under Chief Obafemi Awolowo have been deeply eroded by the awkward arrangements of a unitary system camouflaging as a federal state. We must return to a more robust federalism built on a modified 1963 Republican constitution.

“Yoruba had the first television station, first stadium, best civil service, best road networks and a highly organised educational system in the whole of Africa. The master plan for Obafemi Awolowo University was positioned to take care of a Twenty-First Century economy, a highly evolved science in Yoruba language just like the Chinese and Russians. The metro rail project started by the Lateef Jakande government in 1983 was primitively aborted. And that dream has become elusive till this day,” the statement expressed concern.

“The need and urgency for devolution of powers, Fiscal Federalism, and a new construction with parliamentary democracy. Any arrangement other than this would continue to make Nigeria a failed state. And our people are tired of the perennial failure of Project Nigeria. The Yoruba resolutions of several years has once again come to the fore; that is: we either restructure Nigeria or meet in ECOWAS. For we can no longer subjugate our growth, our development and our future in a continuity of a despairing state foisted to hold us back.

“Once again, we salute the courage of our governors and ask that they stand firm. We have already commenced the mobilisation and sensitisation of the entire Yoruba nation to support their efforts.

“Eternal Vigilance is the Price for Liberty!” The COSEG concluded.