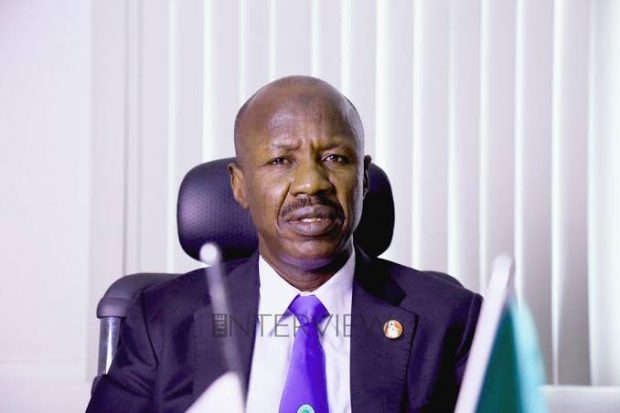 A civil society organisation based in Abuja has described the operations of the Economic and Financial Crimes Commission (EFCC) under its present acting Chairman, Ibrahim Magu, as ‘brutish and crude’.

The Society for Rule of Law in Nigeria (SRLN) therefore raised the alarm that if not cautioned operatives of the anti-graft agency will soon start arresting people in churches and mosques for alleged financial crimes.

The SRLN in a statement on Thursday, 23 January, 2020, said the way the EFCC is operating under Ibrahim Magu, “people will soon start being arrested in social gathering also for spending money perceived as being too many by the operatives of the agency”.

The statement was signed by the group’s Coordinator, Dr Chima Ubeku.

Noting that last week’s invasion of a club in Ibadan by the operatives of the agency has no justification, the group said: “in civilized societies, financial crimes are not investigated through crude invasion of public places to carry out wanton arrest of both the guilty and the innocent”.

The SRLN was equally not happy that the acting EFCC Chairman defended the action of his operatives.

“It was inexcusable that Magu could defend the barbarian act carried out in Ibadan last week by the EFCC operatives by saying
that internet fraudsters gather in the night clubs to spend the money gotten from their victims.

“Does it then suggest that anyone that goes to

night club is a yahoo boy or girl? What will now happen to those with legitimate source of income and are club goers? Were those workers at Club 360 in Ibadan that were brutalized, humiliated, injured, arrested
and detained by the EFCC last week also internet fraudsters?

It noted that anti-corruption fight can never be successful with Magu’s style, pointing out that in saner climes, anti-corruption agencies do not go about raiding public places to arrest people and go about fishing for evidence after.

“Rather, what is done is for proper investigation to have been conducted and prima facie case established against suspects before carrying out arrest.

“With the crude style of EFCC, Nigerians will soon begin to avoid nightclubs, thereby leading to business collapse and loss of
jobs,” SRLN said.

The group counseled Magu to return the EFCC to the glorious days of Nuhu Ribadu and Ibrahim Lamorde when the operatives of the agency were not jumping from one street to the other, “looking for people to arrest
so as to extort money from them”.