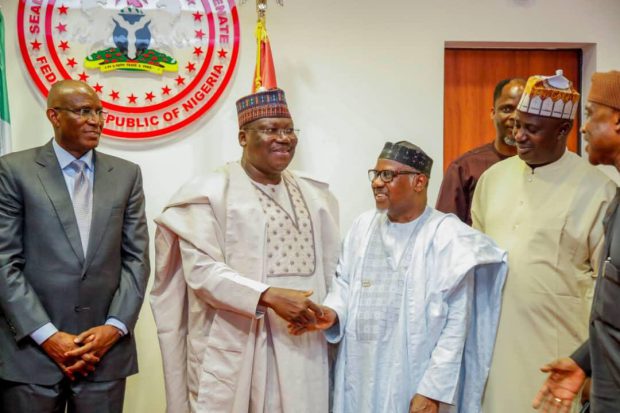 •L-R:Deputy Senate President, Ovie Omo-Agege; President of the Senate, Ahmad Lawan; President of Manufacturer Association of Nigeria (MAN),  Engr Mansur Ahmed, and Deputy Chief Whip of the Senate, Senator Aliyu Sabi Abdullahi, during the courtesy visit by the Executive Committee of MAN to the Senate President at the National Assembly on Thursday, February 6, 2020
•By Ademola Akanni, Abuja
The privatisation of the power sector has failed, thus giving room for the revisit of the power sector privatisation, the President of the Senate, Ahmad Lawan has said.
The Gazelle News.com can also report that the Senate President lamented the that both the electricity distribution companies (DISCOs) and the electricity generation companies (GENCOs) lack the necessary capital to provide efficient service to consumers.
Senator Ahmad Lawan, The Gazelle News.com gathered, stated this on Thursday, 6 February, 2020 when he hosted executive committee members of the Manufacturers Association of Nigeria (MAN) who paid him a courtesy visit in his Abuja office.
“I think the privatisation has not worked. It has failed because the essence of privatisation is to create efficiency,” Lawan told his guests who complained of the adverse effects of the sordid state of electricity supply in the country.
“It appears most of the companies, the DISCOs (Distribution Companies), have no sufficient capital and probably the same thing with the GENCOs (Generation Companies),” Lawan said.
While acknowledging efforts of the government at creating a better situation for the power sector, he stated that government  became desperate to the extent of giving out so much money the electricity distribution and generating companies.
The Senate President, The Gazelle News.com can  report, was emphatic in his belief that even time has come for government to take serious action.
“I think the time has come for government to take a very drastic but necessary decision. If we have privatised the DISCOs and the GENCOs, I think, the private sector, those who have taken them over, should be able to make them work better than they were before.
“If they cannot, I  think we need to revisit this privatisation because we cannot go on like that. We should look at the larger interest of Nigerians not of those companies that have taken over the power sector – the DISCOs and the GENCOs.
“We are going to support the executive arm of government… We will suggest that going forward we have to revisit the privatisation because apparently the companies are not able to provide the power that we thought they could by now,” Lawan said.
Lawan noted that the issue of power has remained one of the major challenges of the nation’s economy adding that “there is no way we can make any serious progress without adequate and steady power supply”.
On the complaint by MAN on the delay encountered in clearing goods at the nation’s seaports, the Senate President expressed his confidence that the federal government  committee on Ease of Doing Business chaired by Vice President Yemi Osinbajo would address the issue.
The committee, he said has since its inception done a lot to normalize and restore efficiency at the ports.
He assured the Association of the National Assembly readiness to partner with it for the growth and development of the nation’s economy.
“Feel free to always come to us when there is need for legislative intervention,” he said.
Earlier, MAN President, Engr. Mansur Ahmed listed insecurity, delebitating power supply and delay in clearing goods as major challenges facing the members of the Association.
The challenges, Ahmed said has resulted into lack of competitiveness by the nation’s manufacturers.
Copyright: The Gazelle News.com
Recommend to friends

In Pictures, Aregbesola, Malami, Others Meet...