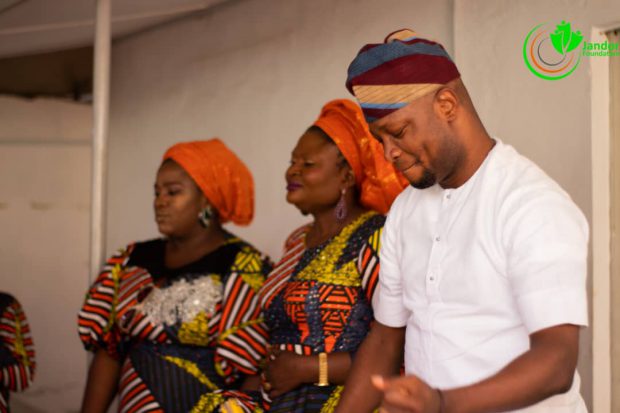 The Prestige Women Forum of Oshodi-Isolo Local Government Area have declared their support for Mr. Abdulazeez Olajide Adediran, the lead Visioner of Team Jandor on his future aspirations.
This is coming after the numerous projects of Team Jandor, which have touched lives of citizens across the 20 Local Government Areas and 37 Local Council Development Areas of Lagos State.
Speaking during a courtesy visit to the Lead Visioner of Team Jandor,  Mr. Abdulazeez Olajide Adediran, the leader of the group, Hon. Bukola Lawal described Adediran as a man of honour who have the fear of God and the love of his people at heart.
Also speaking, the Vice – President of the group, Hon. Bisola Saka shared her experience with the Jandor Foundation founder, noting his good deeds towards her when she approached him for help.
In her words,  “Jandor is such a reliable man that we can all support and get rewarded through better projects that will affect the lives of the people, we will speak our leaders and they will have to do this for us this time”.
In a swift response, the Lead Visioner of Team Jandor, Mr. Abdulazeez Olajide Adediran appreciated the women group for their support and declaration for the Team Jandor Project.
Narrating his journey through life, Adediran said he is just privileged to attain his present status, hence there is need to give back to the society despite spending his private funds which he has done consistently for more than a decade.
Jandor as he is popularly called told the women group of how he has been at the corridor of power for close to two decades as a journalist and a consultant to the government, public and private firms at different levels.
”I can assure you that I won’t relent, improving the lots of the less privileged as a way of appreciating God for His mercy upon me over the years”, he disclosed.
Mr. Abdulazeez Olajide Adediran also played host to various groups across the state in different strategic meetings, including leaders from Lagos Central Senatorial District, PIM from Itire-Ikate and Hon Elvis Olumuyiwa led group from Ojo Local Government Area.
Recommend to friends