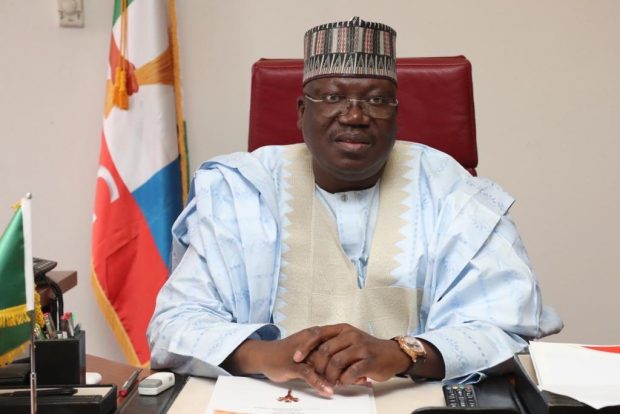 President of the Senate, Ahmad Lawan, has charged the various Senate caucuses representing the six geo-political zones in the country to work together in the interest of Nigeria.
Lawan gave the charge during the start of plenary on Wednesday, 12 February, 2020,  in his remarks sequel to a point of order raised by the Minority Leader, Senator Enyinnaya Abaribe on the emergence of a new leadership for the South East Senators caucus.
Coming under order 43 of the Senate rules, Abaribe informed the upper chamber that the caucus within the week, elected Former Deputy President of the Senate, Ike Ekweremadu, as its Chairman.
Abaribe said, “I come under order 43, just to inform the Senate that there has been a change in leadership of the South East caucus, and the Chairman of the caucus now is Distinguished Senator Ike Ekweremadu. I have handed over to him and the election was peaceful.”
In his remarks on Abaribe’s order, the President of the Senate congratulated the Minority Leader for his contribution to the growth of the caucus under his watch.
Lawan, called on the new Chairman of the caucus, Ike Ekweremadu, to ensure that the South East part of the country is sufficiently represented by his leadership.
“I would rather use the word a new leadership, rather than a change.
“Let me congratulate you for steering the ship of the leadership of the South East caucus over the years, you did very well. We are expecting you will do better as Minority Leader.
“May I also take this opportunity to congratulate the former Deputy President of the Senate, Senator Ike Ekweremadu, for his election. We pray that God will guide him.
“He did well as Deputy President of the Senate, we expect that the South East caucus will cooperate with him to ensure that part of the country feels satisfactorily represented, and of course, we expect that the caucus will continue to work with Senators from other parts of the country to ensure we move Nigeria forward, and take it to the next level satisfactorily,” Lawan said.
Recommend to friends