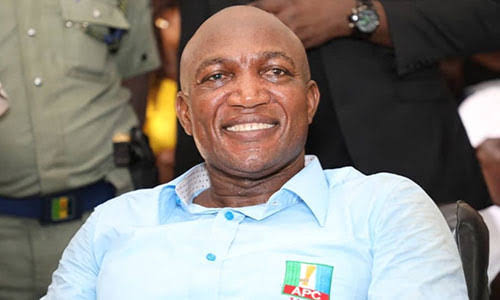 The Supreme Court on Thursday nullified the election of Bayelsa State governor-elect, David Lyon, and his running mate, Biobarakuma Degi-Eremienyo, who were already preparing to be inaugurated on Friday (tomorrow).

A five-man panel of the apex court, led by Justice Mary Peter-Odili, ordered the Independent National Electoral Commission to withdraw the Certificate of Return issued to the All Progressives Congress’ candidates who had been declared winners of the November 16, 2019 governorship election in the state.

The apex court ordered INEC to issue fresh certificates to the candidates of the party with the next highest votes and with the required constitutional spread of votes in the results of the election, which are the Peoples Democratic Party’s candidates.

Justice Ejembi Ekwo, who read the lead judgment of the apex court, made the orders after disqualifying the APC deputy governorship candidate, Degi-Eremienyo, as a candidate in the election.

The court upheld the November 12, 2019 judgment of the Federal High Court in Abuja, which had disqualified Degi-Eremienyo in the election for submitting forged certificates to INEC.

Justice Eko disqualified Degi-Eremienyo’s candidacy on the grounds that he presented false information about his educational qualifications in his Form CF001 submitted to INEC as a candidate for the 2019 election.

He noted that the “claims” by Degi-Eremienyo appeared to be “fraudulent”, pointing out to “several names he uses variously chameleonically to suit the changing environment.”

He ruled that Degi-Eremienyo’s disqualification on the basis of submitting false information to INEC had infected the joint ticket with which he and Lyon contested the election and emerged victorious.

“Both candidates disqualified are deemed not to be candidates in the governorship election.”

Justice Eko, in nullifying APC’s victory, restored and affirmed the earlier judgment of Justice Inyang Ekwo of the Federal High Court in Abuja, which disqualified Degi-Eremienyo’s candidacy and nullified the party’s ticket for the poll.

He set aside the December 23, 2019 judgment of the Court of Appeal in Abuja which had contrary to the Federal High Court’s decision validated the former deputy governor-elect’s candidacy.

The appeal ruled upon by the Supreme Court was filed by the PDP, its governorship and deputy governorship candidates of the party, who had alleged in their suit originated at the Federal High Court in Abuja that Degi-Eremienyo presented to INEC, documents of academic qualifications with about nine variations of names different from the name that appeared on his Form CF001 submitted to the electoral commission.

He was said to have claimed to have obtained “his First School Leaving Certificate in 1976” and presented to INEC “a First Leaving School Certificate of one Degi Biobaragha other than the one bearing his name Biobaragha Degi-Eremieoyo as shown in his INEC Form CF001”.

He was also said to have claimed to have “obtained his West African Examinations Council General Certificate of Education in 1984” and presented to INEC, “a GCE certificate of one Adegi Bibakuo other than the one bearing his name Biobarakuma Degi-Eremieoyo as shown in his INEC Form CF001.”

The Federal High Court had held that there was no evidence to prove that the documents with different name variations were his.

Upholding the finding on Thursday, the apex court held that the affidavits of correction of names and regularisation of names filed by him were not enough as he ought to have followed the laid down legal procedures.

It ordered INEC to withdraw the certificates of return issued to Lyon and Degi-Eremienyo as the winners of the poll.

It ordered fresh ones to be issued to the governorship and deputy governorship candidates of the party with the highest votes and met the constitutional spread of votes in the election.

It also ordered the newly declared winners of the election to be sworn in at the appropriate time.