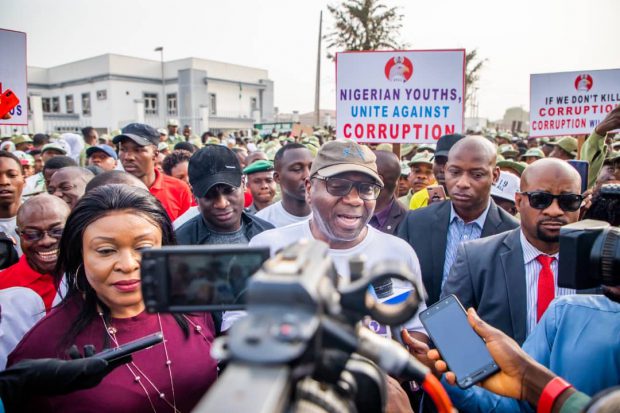 Kwara State Government has collected a total of N300 million from the Economic and Financial Crimes Commission (EFCC) as part of the state’s looted fund by administrations in the state, The Gazelle News.com can report.

The state Governor, AbdulRahman AbdulRazaq, The Gazelle News.com learnt, revealed this on Friday, 14 February, 2020 in Ilorin.

Governor AbdulRazaq was speaking during an anti-corruption walk organised by the EFCC in conjunction with the National Youth Service Corps (NYSC).

The Gazelle News.com also gathered that the Governor confirmed that the fund came in two instalments. “We had earlier collected N100 million and now we have collected another  N200 million,” AbdulRazaq said.

The Kwara Governor commended the EFCC for recovering the state’s looted fund and going ahead to return the fund to the state. “They have made a lot of progress in this regard and we must commend them,” he said.

Tagged Nigerian Youths Walk Against Corruption, AbdulRazaq was joined in the over two-hour walk by the Speaker of the House of Assembly Yakubu Danladi; zonal head of the Economic and Financial Crimes Commission (EFCC) Isyaku Sharu; State Coordinator of the National Youths Service Corps Esther Ikupolati; members of the House of Assembly; hundreds of members of the NYSC; artisans; and civil society organisations.

The Gazelle News.com learnt that the walk was one of the EFCC’s public awareness programmes to draw attention to the danger of corruption.

AbdulRazaq, who arrived the EFCC office at 7a.m. and joined the walk from the beginning to the end, repeated President Muhammadu Buhari’s refrain that corruption would kill the country if the country fails to kill the cancer that the Governor said was responsible for the slow pace of development.

“We have been walking the talk, now we are walking in support of the war (against corruption). The message is very clear: kill corruption or it will kill us all.

“We have to do the right thing and be cautious. We have seen what has happened to those that have been in (this) position before us. Nobody wants to live office and be going to EFCC’s office daily. So, we will do the right thing in Kwara State state,” he said.

The anti-corruption walk was organised by the EFCC in partnership with the NYSC.

Danladi said the corruption crusade requires the support of all Nigerians to succeed, asserting that graft is deadlier to the society than HIV/AIDS and must be stamped out, especially in Kwara where he lamented how billions of naira have been diverted to private pockets at the expense of the masses.

He also lamented the negative impacts of internet fraud on the country and called on the youths to shun it.

Sharu, who lauded AbdulRazaq for being an anti-graft crusader, said the agency has recorded 48 convictions and recovered at least N8.5bn in cash and properties in Kwara since it began operation last year.

Sharu said the agency is also probing the alleged diversion of over N3bn from the controversial Light Up Kwara project .

Sharu called on the youths to stop celebrating corrupt elements and support anti-corruption crusade through the government’s whistle blower policy because they are the worst hit by the effects of diversion of public funds.

“What we saw last Monday at the Federal High Court Ilorin was a show of shame and national embarrassment by some group of youth who came out en masse to show solidarity to an accused person charged for money laundering by the EFCC. The media houses have all carried the picture of the said accused person waiving hands to those shameless youths. This is indeed sad,” according to the local anti-corruption chief.

Ikupolati also urged youths to support the crusade against corruption as their future depends on how much Nigeria is able to grow, warning graft makes development a mirage.

She commended AbdulRazaq for the phenomenal transformation of the NYSC camp at Yikpata since he assumed office in May, recalling how the Governor’s visit and his experience led him to totally improve the facilities at the camp.

“Today, Kwara now has a camp that is like a five star hotel. It has never been so good. We now have water running and our story has changed completely,” Ikupolati said.