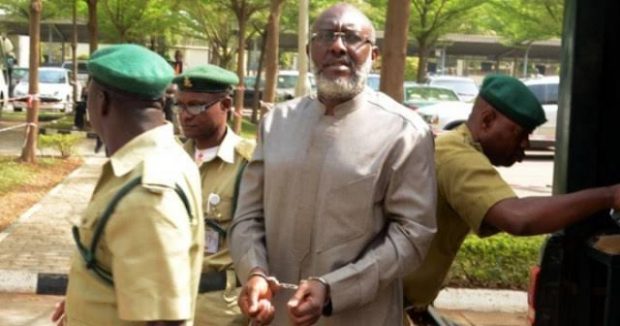 Federal High Court, Abuja, presided over by Justice Okon Abang today, Tuesday, February 25, 2020 gave a seven year jail term sentence to Chief Olisa Metuh, having found him guilty of all the seven-count charges, preferred against him by the Economic and Financial Crimes Commission, EFCC. He is also to refund the sum of N425million to the Federal Government.

Also convicted is his firm, Destra Investment Limited (2nd defendant), which was liquidated by the court. The seven-count charge upon which Metu was jailed borders on money laundering, criminal conversion and diversion of funds to the tune of N400, 000, 000 (Four Hundred Million Naira).

The convict, who was a former national publicity secretary of the Peoples Democratic Party, PDP, received the said sum from the Office of the National Security Adviser, ONSA, then headed by Colonel Sambo Dasuki (retired). The prosecution had insisted that the said N400million was diverted to personal use and purchase of property in Banana Island, Lagos.

It could be recalled that the convicts were arraigned on January 2016, and on February 2016, an amended seven-count charge was preferred against them. The prosecution through its counsel Silvernus Tahir, closed its case since November 2016, but the defendants embarked on several delay tactics to frustrate the trial.

Metuh was found guilty of count one of the charge which borders on unlawful possession of the aforementioned sum. The court held that “Metuh took possession of the N400million from the Office of the National Security Adviser without contractual agreement”.

Metuh and his company were also found guilty of count two of the charge which borders on conversion of the sum by using part of the money to acquire a property in Banana Island.

They were also found guilty of count three and four of the charge which have to do with detention and retention of N400million while count five and six have to do with making cash transfer above the statutory threshold of N5million for individual and N10million for a corporate body. The judge agreed that “the said transaction was in violation of Money Laundering Act as amended in 2012. The prosecution had proven that there was a cash transaction involving the defendant where over $2million was sent to one Nneka Ararume in his residence and the transaction was not by a financial instrument”. The judge also agreed that the origin of the $2million remained undocumented which was to launder the origin of the fund.

While count seven involved the unlawful transfer of N21.7million to the late Chief Tony Anenni, the court held that the defendant ought to have known that the said amount formed part of unlawful act of the former NSA, and that the prosecution has proved that there was transfer of funds to Chief Tony Anehni for which he was also found guilty and convicted as well.

The judge sentenced Metuh to seven years on count one, two, four and seven; and five years on count three,five and six, totally 43 years. The sentences run concurrently, which leaves Metu to serve only seven years, beginning from the day of conviction.

The court also fined the second defendant, Metu’s Destra investment Limited, the sum of N25million each on counts five and six.  While Metu is also to refund the sum of N375million to the Federal Government of Nigeria.

The money in the Diamond Bank account of the second defendant was forfeited to the Federal Government and the company is to be wound up.

COVID-19: Intelligences We Want In Our Leaders

Oyo Records Another Case Of Coronavirus,...