New minister-designate, Musiliu Obanikoro was roundly condemned today when he tweeted that the Presidential candidate of the All Progressives Congress, Maj. General Muhammadu Buhari was pelted with stone in Lagos today.

Kayode Ogundamisi, a Nigerian based in London, promptly tweeted back: “Sorry Musilu the only STONE you saw was in yah dream”.

Obanikoro had acted on a false news report to condemn the alleged stoning of the APC candidate in the Idumagbo area of Lagos.

But all witnesses to the APC rally in Teslim Balogun Stadium, the pre-rally visit to the Oba of Lagos and the procession to the stadium denied the report.

In a statement the All Progressives Congress (APC) said the story by former MInister of State for Defence Musiliu Obanikoro was a brazen a lie and that a lie has never worn a bolder face.

Alhaji Lai Mohammed, the party’s national publicity secretary said Gen. Buhari and other top leaders of the APC rode in an open bus from the Palace of the Oba of Lagos to the Teslim Balogun Stadium venue of the rally, to great cheers from Lagosians who lined the route.

”Not once was he pelted with stone during the almost two-hour ride. It is obvious that those who were paid by Mr. Obanikoro to stone the General failed to deliver. We therefore urge him to seek a refund of whatever money he paid to his hired hands to pelt Gen. Buhari with stones,” it said.

APC said Obanikoro’s statement on an imaginary attack on Gen. Buhari in Lagos must be his own way of saying ‘thank you’ to his masters for nominating him as Minister on Friday, as his reward for ceding the gubernatorial ticket he claimed to have won to Jimi Agbaje.

The party thanked the good people of Lagos for turning out in unprecedented numbers to welcome Gen. Buhari to Lagos, saying the Centre of Excellence has never witnessed such a huge and crowd in years. 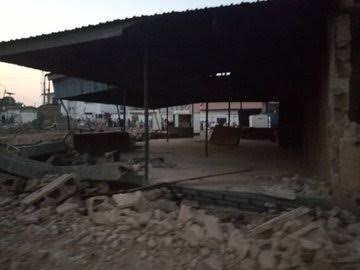 Amaechi, Determinant In Occupier Of Aso Rock In 2015 – Eze