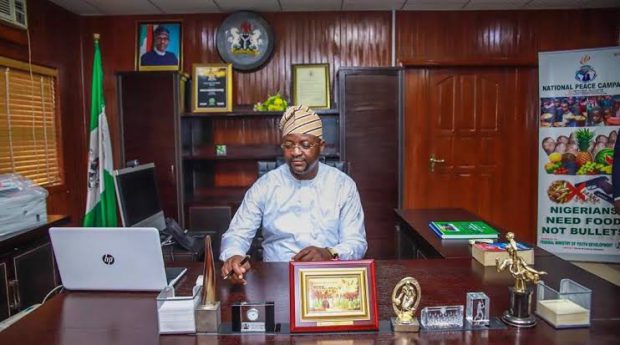 The Minister for Youth and Sports Development, Mr. Sunday Dare has pledged his full support to the Nigeria Police towards the realization of the objectives inherent in organizing the 12th Biennial Nigeria Police Games, which holds in Anambra State from 29th February to 7th March, 2020.

He gave this assurance when the Central Organizing Committee for the Games led by the Chairman, AIG Usman Baba Alkali visited him in his office on Tuesday, 25th February, 2020 to apprise him on preparations towards the historic event.

The Minister further stated that the Ministry has already reeled-out plans to take full advantage of the event to identify sports talents within the Force for the country and work with the Police in developing them to future champions.

He also notes that the Ministry will work closely with the Nigeria Police and the Anambra State Government for the success of the event.

Ambassador Mary Onyali (OFR), an accomplished Nigerian athlete, also the director of Talent Hunt Program (THP) in the Ministry and Special Adviser to the Honourable Minister on Sports, was appointed to serve as the Ministry’s Liaison Officer for the Games and the head of talent hunting team for Anambra 2020.

Meanwhile, the Chairman of the Central Organizing Committee while thanking the Minister for his support, reiterated that the Nigeria Police will not fall below its age-long standard of producing world-class champions for the country.