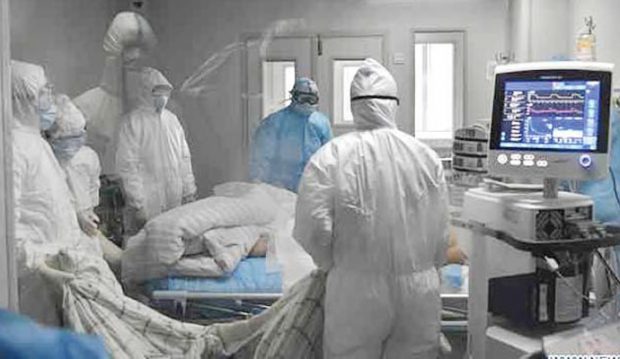 President of the Senate, Ahmad Lawan, has asked the Minister of Finance, Zainab Ahmed, to immediately release the sum of N620m to the Nigerian Centre for Disease Control (NCDC), an amount budgeted for emergency response to the Coronavirus (COVID – 19) outbreak.
Lawan made the call on Wednesday when the leadership of the Senate undertook a tour of Isolation Centres located at the University of Abuja Teaching Hospital, Gwagwalada.
The Senate President, while speaking to journalists after an inspection of two facilities, bemoaned the lack of preparedness and expressed frustration at the state of the isolation centres which were yet to be completed.
Speaking on the findings of the Senate leadership, Lawan said, “First of all, let me say that the representatives of the Federal Ministry of Health, the Nigerian Centre for Disease Control (NCDC) and the management of the University of Abuja Teaching Hospital are in high spirits, looking determined to discharge their mandates and obligations.
“But from our inspection here, the temporary isolation centre is really not in good shape, it doesn’t look ready to receive any patient, and I believe that this is something that we need to fix between now and tomorrow.
“We are in an emergency, even if we don’t have people who are affected, we shouldn’t just rest on our oars. We have to do everything and anything possible to fix that temporary isolation centre to be prepared to receive anyone who falls sick in this respect.
“I am sad, we are indeed actually sad, that of the N620 million that was supposed to be released to this place for fixing of everything here to NCDC, not a kobo has been released.
“We are going to get across to the Minister of Finance and all the other authorities that have anything to do with this to release this money latest between today and tomorrow.”
The Senate President, further lamented that Nigeria, despite being a country with the largest economy in Africa, is yet to have a completed Isolation Centre in any of the geo-political zones that would provide emergency response to disease outbreak in the country.
He charged those saddled with leadership responsibilities in the country to live up to expectations through timely discharge of their mandates and duties.
“There’s no way that Nigeria, the largest economy in Africa, with a population of two hundred million, and yet the Federal Capital and six surrounding states of the North Central, you don’t have one room that you can call an isolation centre, where anyone who unfortunately falls into this crisis will be taken to. This is not acceptable.
“So, we are going to ensure that the money is released, we are not going to put pressure. This is what they are supposed to do, and they must do it.
“I also believe that we should have a replication of the permanent site, we should be able to complete this and then have five others across the remaining geo-political zones of the country.
“Let’s spend money for our people, we waste money for some things that are less important. This is about the health and lives of the people of this country, and therefore, no investment is too much.
“So, we should be prepared at all times. We had Ebola, SARS, now we have Coronavirus, we do not know what else will come, but we should be prepared and ready for any eventuality, and no investment is too much.
“The contractor said by the end of this month this should be ready, we pray it should be faster, but by the end of tomorrow, that temporary site must be ready.
“There’s no generator, no electricity, nothing. There were two or three air conditioners brought this morning, maybe because yesterday we said we were coming here. This is not acceptable.
“As leaders given responsibilities, we have to do what is right. This is unfortunate. So, the Ministry of Finance should release the N620 million between today and tomorrow.”
The Senate President assured Nigerians that the relevant committees of the Senate will carry out a follow-up on Thursday to ensure that work on the isolation centres begins and is completed.
“The Senate Committee on Health will come back tomorrow (Thursday), we want to see that temporary isolation centre fixed.
“We need to be committed, we need to be very serious, and this is the essence of our oversight, but because it is very important, we decided that the leadership of the Senate should lead this oversight,” Lawan said.
Recommend to friends