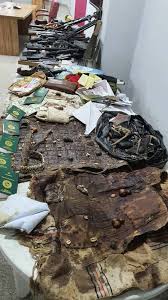 A fact-checking investigation by PRNigeria has revealed that the recent photos of weapons and charms recovered in Sunday Igboho’s residence was taken recently by the Department of State Security Service (DSS).

This was contrary to claims on Social Media that the pictures had appeared on a Facebook post in 2013.

An unidentified individual in a viral video claims that the guns recovered from Sunday Igboho’s house during a raid on his facility is not real but extracted from a Facebook post dated as far back as July 8th, 2013.

PRNigeria undertook a Tine Eye reverse image search which checked over 48.1 billion images that didn’t find any matches indicating that the photos appeared anywhere online in the past. Also, a google reverse image search turned up results that show the images appearing online From July 1, 2021, when the DSS first shared them and all search results point to Sunday Igboho’s residence.

Furthermore, an examination of the profile of the Facebook user, Rotimi Adebuji, alleged to have shared the photo on his timeline since 2013, shows that the photos were cited in a collage that Facebook compiled for the said user to celebrate 5,000 pictures he has uploaded on his timeline dating back to 2013.

The photos had not appeared anywhere online before the Department of State Services (DSS) publicized them and was shared afterwards by the Facebook user. Dates of the photo on the said collage (from 2013 – date) shows that the photo was uploaded as recent as July 2nd.

A scroll down the photos in the collage from 2013 also reveals the latest photos of Nnamdi Kanu’s arrest photos where he wore Fendi.

It is, therefore, possible to have a Facebook collage/album which bears a former date but new photos with recent date can be uploaded. A click on the photo and examination of the accompanying metadata description would reveal the date a post was uploaded.

Therefore the claim that the pictures of weapons and charms recovered from Sunday Igboho’s residence had appeared on Facebook in 2013 is false and misleading and should therefore be disregarded by the general public.

Fact-Check: Were Photos of Recovered Weapons, Charms in Igboho’s House Posted on Facebook in 2013?