By The Gazelle NewsJune 20, 2022No Comments4 Mins Read 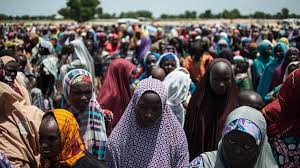 Share
Facebook Twitter LinkedIn Pinterest Email
The United Nations High Commissioner for Refugees (UNHCR) has disclosed that Nigeria currently has 3.2 million Internally displaced persons and 84,000 refugees.
The UN Refugee Agency while revealing that  it’s global trends report, released on 16th June 2022 showed that 89.3 million people were forcibly displaced at the end of 2021 worldwide, with 27.1 million being refugees, 53.2 million IDPs, and 4.6 million asylum seekers, noted that most of the refugees in Nigeria come predominately from South West and North West regions of Cameroon affected by the conflict between the government and activists calling for separation of Anglophone regions.
The UNHCR, in a statement on Monday marking the World Refugee by it’s Representative in Nigeria, Ms. Chansa Kapaya said the 77,000 Cameroonians are hosted mainly in four states.
She noted that: “in Cross River, Taraba, Benue and Akwa Ibom they began arriving as of 2017 to date. Nigeria also hosts an additional 6,900 refugees and asylum seekers from other countries, but predominately from Syria, Niger, DRC, Turkey CAR, Lebanon mainly settled in urban cities in Nigeria, like Lagos, Abuja, Kano, Ogun.”
She said: “Nigeria is party to the 1951 United Nations Convention relating to the status of refugees and its 1967 protocol as well as the 1969 OAU Convention and other regional instruments which mandate signatories to provide protection to a person who seeks refuge(asylum) owing to a well-founded fear for his life and to seek durable solutions to their problems. Nigeria has fulfilled her international obligations and has also reaffirmed her commitment and exceptional solidarity with refugees by her commitment to the Global Compact on Refugees (GCR) principles of refugee inclusion and responsibility sharing.”
Kapaya said with this year’s  World refugee Day theme: “The Right to seek Safety” as individuals, we all share the responsibility to protect people seeking safety. whoever they are, wherever they come from, and whenever they are forced to flee.”
She added: “But reaching safety is only just the beginning, people fleeing war or other forms of violence or abuse need opportunities to heal, learn, work, and thrive. This is in line with the refugee convention and the Global Compact on Refugees. They also need solutions, such as an opportunity to return home when the situation permits in safety and dignity, or to integrate locally wherever they have found safety and have rebuilt their lives, or for the most vulnerable cases opportunities to be resettled to a third country. We can all make a difference, in the lives of refugees, we can play a part, no one is a refugee by choice, but we have the choice whether to help or not, whoever, wherever, whenever. Everyone has the right to seek safety. Seeking asylum is human right and protecting refugees is a collective global responsibility!”
In his message on the day, the High Commissioner for Refugees, Filippo Grandi asked world leaders to shun war and embrace peaceful resolution of crisis.
He said: “Yet this year we are again reminded of the work we have ahead of us as world leaders remain unable or unwilling to resolve conflicts. We at UNHCR recently announced the seemingly unimaginable: 100 million people have now been forced to flee their homes. The war in Ukraine, as well as new or continuing emergencies in places such as Ethiopia, Burkina Faso, Myanmar, Nigeria, Afghanistan, and the Democratic Republic of the Congo, have all contributed to this staggering figure.”
He lamented that: “The solutions deficit continues to grow as more people are forced to flee than are able to return home, resettle to a third country, or integrate fully into the country where they have sought safety. In other words, forced displacement is outpacing solutions for those on the run. But it doesn’t have to be that way.”
He said: “Leaders can work together to make peace and resolve the plight of the displaced with lasting and humane solutions.”