By The Gazelle NewsJune 28, 2022No Comments5 Mins Read 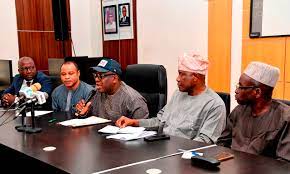 Lagos State will be on another 30-year journey in pursuit of physical development, social growth and economic prosperity. Governor Babajide Sanwo-Olu broke this news to business leaders and the organised private sector at an interactive meeting, on Tuesday, 28 June, 2022.

The Lagos State Development Plan 2052, Sanwo-Olu said, will be officially rolled out at the forthcoming 9th Economic Summit of the State (known as Ehingbeti). The 30-year plan, the Governor said, was developed with clear objectives from four strategic dimensions aimed at positioning the State to achieve its vision.

The meeting, held at Commerce House on Victoria Island, was at the instance of the Lagos Chamber of Commerce and Industry (LCCI). It was also attended by members of the diplomatic community. Established in 1888, the LCCI is the oldest chamber of commerce in the West Africa sub-region.

Sanwo-Olu hinted that each of the four dimensions in the development plan would be achieved through over 400 policy initiatives that would be implemented throughout the period.

He said: “The Lagos State Development Plan 2052 has been developed with a set of clear objectives across four strategic dimensions, which are to position Lagos on the track to achieving its vision. The dimensions to this plan are to keep a thriving economy that will make Lagos a robust, healthy and growing economy with adequate jobs and strategic investments to sustain growth. We are building a human-centric city in which every Lagosian will have access to affordable and world-class education, healthcare and social services.

“There will be deliberate effort to keep modernising our infrastructure, by providing reliable and sufficient infrastructure that meets the needs of a 21st century city. The plan will also bring about sustenance of effective governance. Lagos will have a supportive and enabling environment that creates opportunities for all Lagosians.

This is a huge task that must be achieved between now and the nearest possible future.”

Sanwo-Olu believed the plan would not be realised when the private sector – the drivers of the State’s economy – is not carried along in the implementation of the identified policy phases.

The Governor thanked the business community for supporting the State Government in dealing with arising issues in the challenging period of Coronavirus (COVID-19) pushback, noting that more social burden could have trailed the pandemic had the private sector not considered the Government’s entreaty that prevented mass retrenchment of workers.

Sanwo-Olu used the occasion to reel out interventions initiated by the State Government in the areas of infrastructure, transportation, education, healthcare, security, environment and technology to improve ease of doing business in Lagos.

He said: “In road construction, I make bold to say that our impacts are being felt across the State, because we have taken up the total rehabilitation of major roads and creating new highways. In the Central Business District of Victoria Island and Ikoyi, we have delivered key infrastructure projects that are improving mobility and giving businessmen new experience. Reconstruction of Idowu Taylor, Adeyemo Alakija, Adeola Hopewell is a major facelift we have signed off in this corridor.

“For the first time, we are seeing a sub-national Government building rail lines to improve mobility. Lagos is expecting two brand-new light rail projects in a few months and we took this audacious decision about three years ago to deliver this important transport infrastructure. Our intervention in education has yielded a highly encouraging outcome, given the results of our students in national examinations. All of these have confirmed that we are on the right track.”

In the last one year, Sanwo-Olu said Lagos had recorded massive influx of Foreign Direct Investment (FDI) up to the tune of $750 million in the technology sector, attracting global tech brands, such as Equinox, Google, and Microsoft, among others. This, he said, is complementing the rollout of metropolitan fibres by the State Government to promote e-commerce, traffic management and improve security.

The Governor expressed the hope that the meeting would lead to creation of new pathways that would facilitate a more robust relationship with the private sector.

Noting that Lagos had continued to be the investment haven for FDIs coming to the country, Olawale-Cole said the State alone accounted 71 per cent of the $1,573 billion foreign investment Nigeria recorded in the first quarter of 2022.

He said: “Policy direction is critical for a thriving and supportive business environment in any economy. The quality of the policy is a key consideration for local and foreign investment decisions. With an improved business environment, Lagos can attract more capital inflows from Nigerians in Diaspora as a more sustainable funding for the provision of required infrastructure. Enormity of needs in Lagos requires the cooperation of both the public and private sector.”

The LCCI boss announced that Lagos would be the official chief host of the international tech and telecommunication (ICTEL) expo coming up in August.

LCCI Deputy President and Group Executive Director at Dangote Group, Mr. Knut Ulvmoen, said Sanwo-Olu took his most important decision to come out and meet with the investors.

The Norwegian, who has lived in Lagos for 36 years, said he had witnessed the city transformed before his eyes into a blossoming economy.

He said: “The Lagos narrative is a story in progress. The city is now cleaner than it used to be. I implore the Government to focus more on education and make it accessible to the teeming young people. This is what will sustain the city in the long term. Government leaders should demand more than donations from the international community; they must come and create jobs.”