By The Gazelle NewsJuly 1, 2022No Comments2 Mins Read 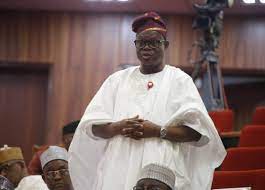 Share
Facebook Twitter LinkedIn Pinterest Email
Osun State Governor, Adegboyega Oyetola has felicitated with the spokesperson of the 9th Senate and Director-General of his re-election Campaign Council, Senator Ajibola Basiru, on the occasion of his 50th birthday anniversary.
Oyetola said he was delighted to join family, friends, political associates, the National Assembly and the All Progressives Congress, APC, to celebrate the lawmaker whose life he noted has been marked by series of accomplishments and contributions to nation-building.
The governor in a statement by his Chief Press Secretary, Ismail Omipidan, described Senator Basiru as a versatile legal professional, brilliant academic, fine legislator, loyal party man, grassroots and progressive politician who continues to contribute his quota to the development of his Constituency, the State and the country as a whole.
He lauded him for his political tendencies and strides at the National Assembly and for being a good ambassador of Osun, saying that he is proud to be associated with him.
Oyetola equally appreciated the celebrant for his selfless service and sterling contributions to the socio-economic and political development of Osun, starting out as the State’s Commissioner for Regional Integration and Special Duties, Commissioner for Justice before moving to the Senate to serve the people of Osun Central.
The governor also used the opportunity to thank SRJ as he is fondly called, for accepting to serve as the Director-General of the Osun APC Campaign Council for the forthcoming governorship election in the State, adding that his efforts and that of other members of the Council would be crowned with a resounding success on July 16.
“Dear distinguished Senator Ajibola Basiru, on behalf my family, government and the people of Osun, I am delighted to join family, friends, political associates, members of the National Assembly and the All Progressives Congress, APC, to celebrate with you on the occasion of your 50th birthday.
“I thank Almighty Allah for your life that has been graciously marked by series of accomplishments and contributions to nation-building. We are proud to be associated with you and thank you, for being a good ambassador of Osun.
“It is my prayer that Allah will grant you longer life and continue to keep you in good health, so as to continue serving your Constituency, our party and Osun in general. Happy 50th birthday, dear distinguished Senator. May your post-50 life be filled with more golden and joyous moments,” Governor Oyetola said.