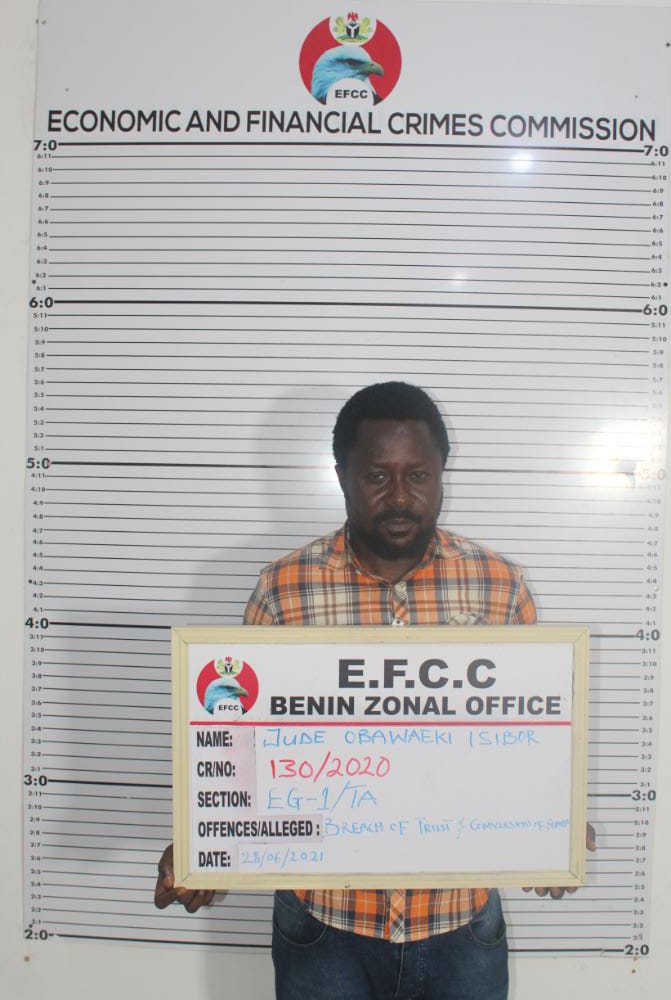 The Economic and Financial Crimes Commission, EFCC,  Benin Zonal Office on Tuesday, 29 June, 2021 arraigned Obawaeki Jude Isibor on a one-count charge bordering on obtaining by false pretence before Justice S.M. Shuaibu of the Federal High Court sitting in Benin City.Isibor is alleged to have, through false representation, obtained the sum of N1,800,000 from one Omosigho Sarah Oduna.The charge reads. “That you Obawaeki Jude Isibor (M) sometime between March and April , 2018 in Benin City within the jurisdiction of this Honourable Court did with intent to defraud obtained the aggregate sum of N1,800,000 (one million  eight hundred thousand naira) from Omosigho Sarah Oduna via your bank account number 2022683100 domiciled in First Bank under the false pretence that same was for job opportunities at the Immigration Service for her friends, which representation you knew was false and thereby committed an offence contrary to Section 1(1)(a) of the Advance Fee Fraud and Other Fraud Related Offences Act, 2006 and punishable under Section 1(3)of the same Act”.The defendant pleaded not guilty to the charge when it was read to them.

In view of his plea, the prosecution counsel,  Francis Jirbo prayed the court to fix a date for trial and to remand the defendant in a Correctional Facility. Attempt by the defence counsel,  Patrick Wilson, to move an oral application for bail was rejected as the court asked that he files a formal application.

Justice Shuaibu adjourned the case till July 12, 2021 for hearing and ordered that the defendant be remanded in EFCC’s custody pending the determination of his bail application.

Sanwo-Olu: We Closed Parts Of Eko Bridge To Save Lives