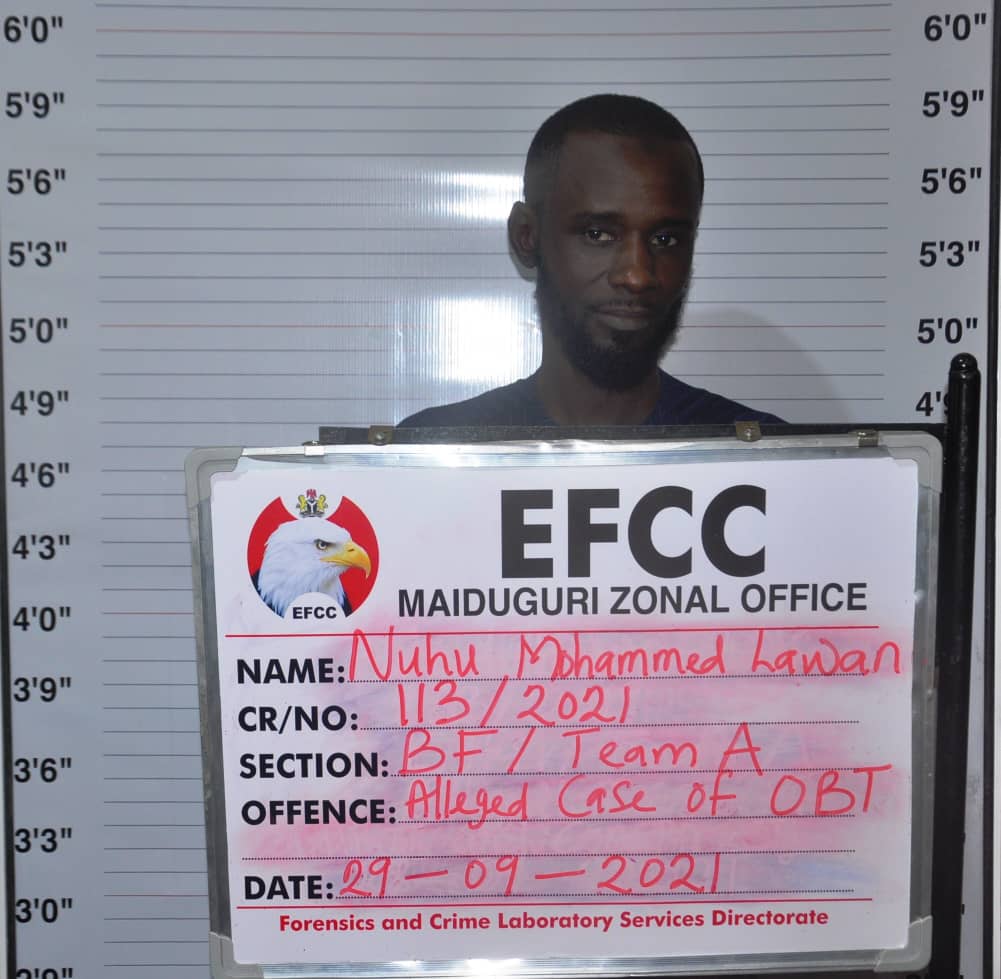 The Maiduguri Zonal Command of the Economic and Financial Crimes Commission, EFCC, on Monday, October 25, 2021 secured the conviction and sentencing of one Nuhu Mohammed Lawan to three months imprisonment before Justice Aisha Kumaliya of the Borno State High Court, Maiduguri for his involvement in a N1.1million employment scam.

The convict who is a staff of the Federal Public Complaints Commission in Borno State was prosecuted on one-count charge of ‘‘cheating’’.

The one-count charge reads; “That you, Nuhu Mohammed Lawan being a Staff of Public Complaints Commission, on the 18th May 2018 at Maiduguri, Borno State within the jurisdiction of this Honourable Court, induced one Kaka Adam Goni to deliver to you the sum of N1, 100,000.00 (One Million, One Hundred Thousand Naira only) via your GTBank account no. 0248921793 believing the money represents payment for a job with the Federal Government of Nigeria, which you knew to be false and thereby committed an offence contrary to Section 320 (a) and punishable under section 322 of the Penal Code Cap 102 Laws of Borno State.”

He pleaded ‘‘guilty’’ to the charge preferred against him.

Upon his plea, the prosecution counsel, Mukhtar Ali Ahmed reviewed the facts of the case and urged the court to convict and sentence Nuhu as charged.

Justice Kumaliya, after listening to the prayers of both parties, convicted and sentenced Nuhu to three months imprisonment.

She further ordered that the convict pay the sum of N1, 100,000.00 (One Million, One Hundred Thousand Naira) in restitution and, in default, serve five years jail term.

The convict was however given an option of N500, 000.00 (Five Hundred Thousand Naira) fine.

Nuhu’s journey to the prison began when the Maiduguri Zonal Command of the EFCC received a petition from one Kaka Adam Goni alleging that the convict collected the sum of N1.1million from him under the guise of securing a job for him with the Nigeria Customs Service.

China Urges Developing Countries To Stand Up Against Bullies

Ongoing Staff Screening Not Targeted At Any Religion – Oyo TESCOM