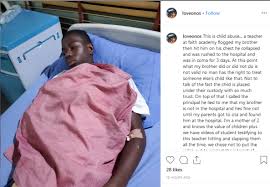 Posted By: The Gazelle NewsIn: Crime, Education, NewsNo Comments
Print Email
A Mathematics teacher in one of the public secondary schools in Ogun State received the beatings of his life from one of his students on Tuesday, 26 October, 2021, reports The Gazelle News.com.
The teacher was ‘dealt’ with for having the ‘effontery’ to stop the boy from beating one of the girls in his class.
The teacher named Owolabi, who teaches Mathematics at Itori Comprehensive High School, Itori, headquarters of Ewekoro Local Government Area of Ogun State was teaching Senior Secondary School 1 students when the boy, in SS 3 entered the class without notice and descended on the girl.
Owolabi allegedly told the boy to stop beating the girl only for the boy to turn to him and gave him the beatings of his life.
The teacher was later rushed to a private hospital in the town after appearing to lose consciousness.
The Gazelle News.com learnt that the boy has been arrested and taken to the police station while security has been beefed up around the school.
The teacher is said to be responding to treatment while the police have not issued any official statement on the matter.

Oyo To Clamp Down On Illegal Miners, Revenue Defaulters