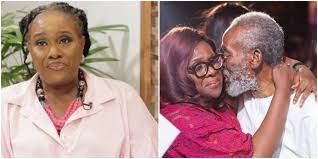 Posted By: The Gazelle NewsIn: Health, NewsNo Comments
Print Email
Nollywood star actress, Joke Silva has opened up on the health condition of her husband, Olu Jacobs for the first time.
She revealed that he is suffering from dementia with lewy bodies (DLB) in an interview with popular TV Chude Jideonwo.
She added that “it’s been going on for a couple of years. He is dealing with issues and it is been going on for a couple of years. It is known as dementia with lewy body.
“It is a degenerative disease that affects the brain and it is almost like a Parkinson type of disease, it affects the brain and affects the person”.
She added: “First time I’m saying this publicly… that is what we have been dealing…but the thing is, it is hard on him because he doesn’t understand what is going on and it is hard on us family members as well.
“We have gone through it over the past couple of years but we thank God.”

EFCC Reacts: Bawa Did Not Advise INEC Not to Sell Forms to Anyone For 2023, Full Statement

Ogun 2023: No One Has Enough Resources To Buy Me Off The Ballot, Says Segun Showunmi