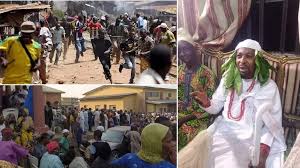 Posted By: The Gazelle NewsIn: Life, Metro, NewsNo Comments
Print Email
The controversy surrounding the installation of Yunusa Akadiri as Akinrun of Ikirun assumed a new twist on Thursday, 24 November, 2022 when his name was conspicuously missing from the list of invited traditional rulers for the swearing-in ceremony of Ademola Adeleke as new Governor of Osun State, reports thegazellenews.com.
People’s Democratic Party (PDP’s) Ademola Adeleke takes oath of office as new Osun State Governor on Sunday, 27 November, 2022.
Investigation by thegazellenews.com revealed that instead of inviting the controversial monarch, organisers of the event sent invitation to the Eesa of Ikirunland, Kareem Adetoye Lawal
Eesa is the second in command to Akinrun of Ikirun and the leader of the kingmakers.
It will be recalled that it is only the Eesa that did not support the purported selection of Akadiri since the inception of the selection and enthronement of the monarch.
On Tuesday, 22 November, 2022, the people of the town had in a show of rejection prevented Akadiri from entering the palace in the ancient town.
This resistance from the people of the town led to clash with the police which equally led to the death of one of the Princes from Gboleru Ruling House, whose turn to present the king was denied.

No Allocation For Permanent Structure On Coastal Road Site – LASG