By The Gazelle NewsNovember 4, 2022No Comments3 Mins Read 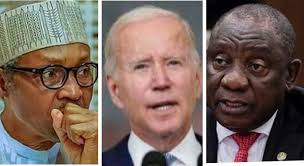 Despite recent US terror alerts, residents and businesses in Abuja, Nigeria’s capital city, and Sandton, a business district in South-Africa, have continued to conduct their normal businesses and daily activities.

PRNigeria observed that the seemingly defiant citizens have continued to engage in their routine activities without expressing fear or anxiety over the recent US security warnings.

Last week the US government warned of possible terror attacks in Abuja, saying terrorists could be targeting government buildings, places of worship, schools, and other centers. days after, the US Embassy in South-Africa notified its citizens that insurgents were planning an attack to be carried out last Saturday at large gatherings in the Sandton area of Johannesburg, South Africa.

Meanwhile, PRNigeria can report that no incidents of terrorism were witnessed in the prominent African cities as predicted by the American government.

On Friday and Sunday, Nigerian Muslims and Christians trooped out in their large numbers to attend congressional prayers in Mosques and churches respectively.

Similarly in South-Africa, thousands of people gathered in Sandton for the traditional Pride march on Saturday without any threat of terrorism as many citizens also stormed the popular Nelson Mandela Square for routine businesses.

On Monday, businesses and offices were opened as usual in both cities in Nigeria and South-Africa.

The security alerts by the US government were condemned by officials in both countries.

South Africa’s President Cyril Ramaphosa on Thursday described as “unfortunate” the US embassy’s warning of a possible weekend “terrorist” attack in the country without consulting its government.

“It is quite unfortunate the US issued that type of warning without having any type of discussion with us,” he said during a press conference.

“Any form of alert will come from the government of the Republic of South Africa and it is unfortunate that another government issued such a threat alert and caused panic among our people,” said Ramaphosa.

Speaking in the same vein, Nigeria’s Minister of Information and Culture, Lai Mohammed, expressed strong disapproval of the unverified security alert. He said that the Federal Government wouldn’t be stampeded by the terror advisories released by the governments of the United States and the United Kingdom.

The Minister said the warning issued by the embassies were not the true position of the security situation in the country and could create unnecessary tension and panic.

Also speaking on behalf of security chiefs after an emergency meeting with President Muhammadu Buhari in Abuja, the National Security Adviser, General Babagana Monguno (rtd), described as false and irresponsible the perception of heightened insecurity the terror alerts.

While assuring Nigerians that there was no cause for alarm, the NSA said the situation was under control.

Monguno admitted that the alert was for American and British citizens but that the way it was communicated complicated the situation.

The NSA, therefore, advised Nigerians to go about their daily activities without fear, saying that the security agencies were in control and that Nigeria was safe.

Buhari To Nigerians: Give Me 7 Days To Resolve New Naira Notes Crisis