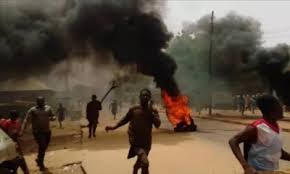 Posted By: The Gazelle NewsIn: Metro, NewsNo Comments
Print Email
Aggrieved indigenes of Ikirun in Osun state today, Wednesday, 23 November, 2022, set the palace of Akirun of Ikirun ablaze to stop the coronation rites.
One person has been confirmed dead as a renewed crisis engulfed Ikirun township on Wednesday, 23 November, 2022, over the alleged forceful mission to smuggle Oba Olalekan Akadiri into the palace.
The deceased has been identified as Lukuman Omoola, a descendant of the Gboleru Ruling House – one of the houses fighting to fill the vacant throne. He was said to have been shot dead.
The Akinrun royal tussle, which has been rocking the town for over a month was renewed when Akadiri allegedly led other persons to the town to gain access into the Palace.
They allegedly forced themselves into the palace with a group of alleged hired thugs from Lagos backing them.
Thegazellenews.com learnt further that the youths regrouped and succeeded in setting the palace ablaze.
In the ensuing melee, Omoola was reportedly shot dead.
There were conflicting reports on who actually killed Omoola.
Some residents of the town alleged that he was shot by the police while others said he was shot by hired thugs who were in police uniform since there was no police deployment from the state police headquarters to Ikirun on Wednesday, 23 November, 2022.