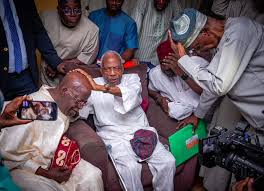 Posted By: The Gazelle NewsIn: News, WorldNo Comments
Print Email
The Coalition of Oódua Self Determination Groups in United Kingdom and Europe has described the adoption and blessings  of the All Progressive Congress (APC) Presidential Candidate, Asiwaju Bola Ahmed Tinubu by the leading Yoruba socio-Political Group, the Afenifere, as the group’s preferred Presidential Candidate for the 2023 election, a very welcome development.
According to the group, this goes to show how the leadership of Afenifere are in sync with the yearnings and aspirations of overwhelming  majority of Yoruba people, at home and in the Diaspora.
This was contained In a communique signed by Comrade Oredolapo Ibrahim, aka Cord after the Coalition’s quarterly meeting in Essex, United Kingdom recently.
The Group reiterated their commitment to be part of the Tinubu/Shetima electoral victory and have vowed to pull time and resources together as their own contributions to the electioneering campaign, saying they are sure of the capacity and ability of Tinubu to deliver on his electoral promises
“His record in human capital development both in and outside government will be a great asset to Nigeria and Nigerians at this point,” the group said.
The Coalition also encouraged all Yoruba sons and daughters to collectively mobilize for the support of the candidacy of Asiwaju Bola Tinubu to win the 2023 Presidential Election.