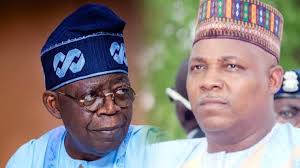 Posted By: The Gazelle NewsIn: NewsNo Comments
Print Email
Traditional rulers of major Awori towns and communities on Sunday, 13 November, 2022, organised a special prayer session for the success of the Presidential Flag-bearers of the All Progressives Congress (APC), Asiwaju Bola Ahmed Tinubu and Senator Kashim Shettima as well as the state Governor, Babajide Sanwo-Olu and his Deputy, Dr Kadir Obafemi Hamzat.
The prayer session took place at the Awori Obas secretariat at the Igandò-Ikotun Local Council Development Area in Ikotun.
According to the Chairman of the Awori Obas, the Ojomu of Ajiran, His Royal Majesty Tijani Akinloye, the prayer session was organised to get divine support for Tinubu and his running mate, the state Governor and his Deputy as well as other APC candidates throughout the federation.
“We’ve no doubt in our mind that though Asiwaju Bola Ahmed Tinubu and Governor Sanwo-Olu are the best candidates for President and Governor respectively, we also have to seek God’s favour because we can’t achieve anything without His blessings and approval,” Oba Akinloye said.
His views were corroborated by the Secretary of the Awori Obas Council and Osolo of Isolo, His Royal Majesty Kabiru Agbabiaka. “We’ve the best candidates and we are extremely happy about that but we must also tell God, call on Him to assist us. This is what we’ve come here to do today, seeking God’s favour and approval for Tinubu/Shettima and Sanwo-Olu/Hamzat,” Oba Agbalagba said.
The Lagos State APC Chairman, Pastor Cornellius Oyefolu Ojelabi commended the traditional rulers for organizing the prayer session noting that seeking favour from God is important in any endeavour or enterprise one finds himself.
“Our Kaabiyesis have shown their support for their sons: Tinubu/Shettima and Sanwo-Olu/Hamzat. This prayer session is also important for us to achieve our aim and I’m really impressed by the gesture our fathers here,” Ojelabi said.
The Lagos APC Chairman assured the traditional rulers that the APC administration at both state and national levels will continue to put in place programmes that will improve their welfare.
He called on the traditional rulers to take the Tinubu and Sanwo-Olu message to their subjects urging them to mobilise their subjects to come out and vote massively for Tinubu/Shettima and Sanwo-Olu/Hamzat.
Islamic clerics presided over the event with reading of the Holy Quran and supplication.
Apart from Pastor Ojelabi, the event was graced by the Director General of the Lagos APC Campaign Council, Senator Ganiyu Olanrewaju Solomon; the Secretary of the Council, Ogboni Fouad Oki; the Director of the Directorate of SDGs for APC PCC, Senator Musiliu Olatunde Obanikoro; the Deputy Director General for APC Campaign Council for Lagos West Senatorial District II, Tolani Sule; and a member of the Campaign Council, Aru Folami among others.

Nigeria’s Next President: A Riposte