By The Gazelle NewsDecember 22, 2022No Comments3 Mins Read 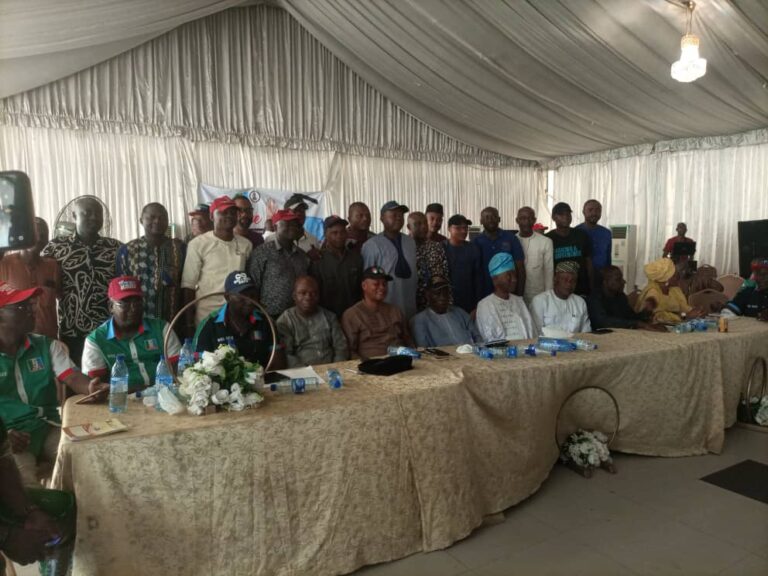 Share
Facebook Twitter LinkedIn Pinterest Email
The All Progressives Congress (APC) Candiate for Lagos Central Senatorial District, Rt. Hon. Wasiu Eshilokun Sanni, in furtherance of his engagement with strategic stakeholders within the Senatorial district, met with some critical stakeholders on Wednesday, 21 December, 2022.
The Deputy Speaker of the Lagos State House of Assembly and his team met separately with the leadership of the National Union of Local Government Employees (NULGE), the Artisans and Tradesmen Association and the Nigeria Union of Teachers (NUT) in all the local governments and Local Council Development Areas that made up the Senatorial District.
In his meeting with the various groups, his message was similar: the need to support and vote for all the candidates of the party particularly, his humble self and the party’s Presidential Candidate, Asiwaju Bola Ahmed Tinubu and the state Governor, Babajide Sanwo-Olu.
“This is the first time our own man from Lagos is vying for the Presidency of this country and we must fully support and back him with our votes for him to win. Don’t forget other APC Candidates: my humble self, our Governor, our Speaker of the House of Representatives and all our party candidates,” he said.
He urged those present to mobilise fully their members not only to collect their PVCs but also to ensure that they cast their votes for the party candidates.
“Asiwaju has a record of performance and we are all living witnesses to his performance as Governor of Lagos. Let’s mobilise and vote for him to replicate what he has done in Lagos for the country,” he said.
Earlier, the co-Chairman of the Wasiu Eshilokun-Sanni Campaign Council, Alhaji Sodiq while introducing the APC Lagos Central Senatorial District Candidate has described him as not only an experienced legislator but also a man who has excelled in all assignments he has been given.
“He’s well read. He has excelled at all assignments he has been assigned to do. As a lawmaker, he was in the Assembly that made the creation of 37 LCDAs possible in Lagos; he was the pioneer state Secretary of APC in the state, has excelled as Chairman of Lagos Island Local Government and has done well as the Deputy Speaker of the Lagos State House of Assembly.
“So we’re presenting to you a Candidate who knows his onions and who will do the job excellently,” Alhaji Sodiq said.
The leadership of the pressure groups present presented their demands to the candidate. Of particular importance were the teachers demand for extension of their retirement age to 65 years and 40 years in service and lifting of embargo on the employment of teaching and non-teaching staff in the state.
On the entourage of Rt Hon Eshilokun-Sanni were: Alhaji Sodiq, Secretary of the Campaign Council, Honourable Hakeem Adeniji; member of the state Local Government Service Commission, Honourable Hakeem Adisa Bamgbala; APC Leader in Surulere, Honourable Adenekan; former Sole Administrator of Lagos Island Local Government, Alhaji Nosiru Musa; former member of the state Local Government Service Commission, Rasheed Giwa and members of the WES Campaign Council.