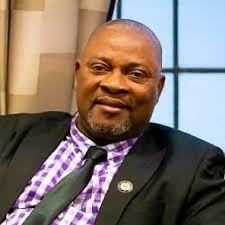 Posted By: The Gazelle NewsIn: News, PoliticsNo Comments
Print Email
House of Representatives aspirant for Mushin Federal Constituency II, Honourable Toyin Fayinka, has challenged rival aspirants to a popularity contest in the area to determine who is more popular and have more grassroots support in the Federal Constituency, reports thegazellenews.com.
Fayinka, contesting on the platform of the All Progressives Congress (APC), threw this challenge during an exclusive interview with thegazellenews.com‘s team of editors in Mushin on Saturday, 30 April, 2022.
The former Leader of the Mushin Local Government Legislative Arm is contesting for the APC ticket with notable challengers like: Honourable Bolaji Yusuf Ayinla aka BYA, the Incumbent who is gunning for third term in office after earlier spending another three terms of four years each at the Lagos State House of Assembly; and former Chairman of Mushin Local Government and current Publicity Secretary of the state chapter of APC, Honourable Seye Oladejo among others.
Asked about his chances against the political heavyweights, Fayinka said he is not afraid of any challenger noting that he has the full support of the people of the constituency.
“With all due sense of modesty, I am the most popular among all the aspirants. The people know me, they interact with me daily. I live in their midst. The people of this Federal Constituency are my strength apart from God Almighty.
“I challenge any of the aspirant to a popularity contest here. Let’s walk down the streets of this Constituency and let’s see who will have the most people in his entourage. Come to Mushin, you will always see me among my people, hence, for me I stand better chance of winning because I’m a man of the people,” Fayinka, also a former Secretary to the Local Government, told thegazellenews.com team.
NB
Watch out for the exclusive full interview with Honourable Toyin Fayinka in our subsequent postings.