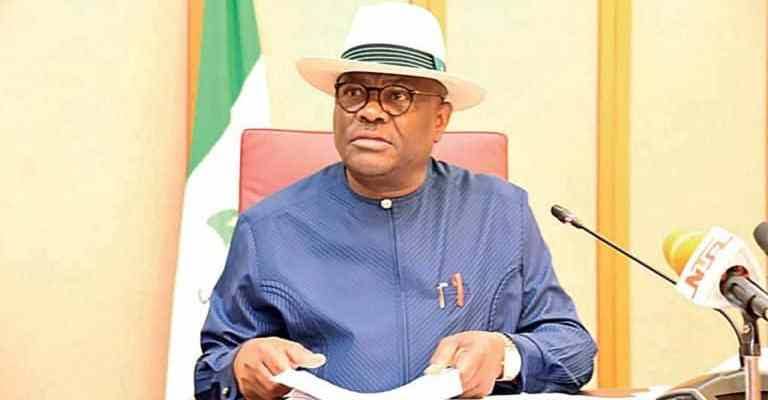 Posted By: The Gazelle NewsIn: News, PoliticsNo Comments
Print Email
A support group, South-South Youth Movement for Wike 2023 on Wednesday urged the Governor of Rivers, Nyesom Wike  to contest in the 2023 presidential election, assuring him of their total support.
The group disclosed this in a statement issued and signed by the Director General Mr Ogidi Bara.and Secretary Mr Frank made available to newsmen in Yenagoa.
“Nigeria since its return to civilian administration has been searching for a strong, dynamic, viable, and virile leadership that will propel the country to compete with other developed nation-states.
“Unfortunately Nigeria is yet to get to that destination.
“Two successful transitions have been made from civilian to civilian administration without concrete evidence of the better living conditions.
“The standard of living, and a functional system has eluded the citizenry without adequate growth to show on the ground while leaving the populace without hope and in destitution.
“However, all this happened as a result of corruption, mismanagement, maladministration, favouritism, and lack of patriotism to bring the desired system that the people aspire for.
“Nigeria has been blessed with enormous resources that will make her compete with other developed nation-states in the world.
“However, these potentials are yet to be harnessed for the betterment of common people in the country.
“People are left in a state of dilemma without functional education, health system, agriculture and functional infrastructural facilities that will culminate in the sound economic system.
The current challenges have inflicted hardship on the lives of the people which resulted in social vices in the society.
“For that reason, we the South-South Youth Movement have come out wholeheartedly to call for His Excellency Nyesom Wike to come out and contest for the number one sit in this country and we are solidly behind him”, .” The group stated.
According to the group, Wike has proven himself as a reliable leader in the past administration and as the current governor of Rivers.
The group, therefore, urged the Peoples Democratic Party to without hesitation and as a matter of necessity nominate Wike as its flag bearer in the 2023 presidential election.

Sanwo-Olu Mourns Jakande, Says He Was One Of Nigeria’s Best Public Office Holders