BREAKING NEWS
Home News 2023: Who Are The Yoruba Leaders? 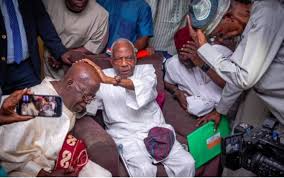 Posted By: The Gazelle NewsIn: News, OpinionNo Comments
Print Email
By Adewale Adeoye
I don’t know if there is division in Afenifere.
But I watched Pa Fasoranti this evening on TV
He said “Tinubu, O maa wo le” which means “Tinubu, you will win.”
Chief Olu Falae spoke in the same vein.
I guess Baba Fasoranti acted based on his conscience either rightly or wrongful.
At the fullness of time in the coming February Presidential election, Yoruba people will go a particular direction based on their conviction and vote for their preferred choice within the limited choices imposed on them by the Nigerian State.
At that time, the true Yoruba leaders will be known.
One thing certain about Yoruba history is that the people have always chosen a direction for their leaders and not the other way round.
The wise leaders would gauge the mood of the people and guide them through  the people’s own  footpaths.
Yoruba have also rejected, in the past, leaders who try to define the people in their own images. Leaders that endured in Yorubaland have been those who applied the Socrates method in leading the people. You first listen to their hues and cries, the leader then asks questions, meets them and to rediscover the people in their raw form from whence the leader moulds his opinion and perspectives.
Awo adopted this method. Papa Ajasin and Pa Adesanya did.
I have had the privilege of my group being invited among other groups by Pa Adesanya at the Pa Onasanya House or at Baba’s Simpson Street office. We were not Afenifere members but we were considered in our little ways as opinion moulders in Yorubaland.
He would find out our opinion in the Pan Yoruba groups.
Sometimes we would be given the honour to attend their extended meetings, including leaders of mechanics association led by David Ajetunmobi at the time, traders, civil society etc in an inclusive manner. It helps to popularise final decisions taken.
The Yoruba are fiercely democratic, they are intelligent enough to understand the difference between tactical and strategic alliances; immediate and future gains, limited and tactical options, temporary and permanent alliances, minimum and maximum programmes.
The people are important in decision making process by their leaders.
But these days, when younger people speak, they are sometimes to be shut down not by superiority of ideas, or symbolic reasoning but by the opaque logic of age. There is nothing as self defeatist as a fish that swims out of water. The fish is the leader, the water is the people. Sometimes the water is warn, sometimes it is cold, sometimes it chills, but the fish must endure and stay within in order to survive, gain momentum and live.
Democracy is not necessarily about making the best choices but making a choice out of free, prior and informed consent.
The choice may even be wrong or right.
The vote MKO Abiola received was not based on the love and affection of his people. As at 1990s, he was seen as one of Awolowo-s die hard opponents by Yoruba people and therefore detested. He was subject of mockery.
Actually, Ibrahim Babangida thought the South West would reject him just as they thought they would reject Obasanjo for a second term after he had been rejected the first time in 1999 South West.
Abiola-s  ITT office in Yaba was the delight of furious stones from NANs and UNILAG students.
But when June 12 came, Yoruba rallied round him for a minimum programme of kicking out the military. This time, he was the pun in the chess game of his sophisticated people.
Such is the dynamics of politics, public interests and popular perspectives.
Ibadan people show us another epic. When IICC plays Rangers, Ibadan would be agog with chorus at Liberty Stadium:
‘ODEGBAMI yoo gesin
ODEGBAMI yoo gesin
Bi o ba go’Kala (Emmanuel Okala, the goal keeper)
Yooo gun Suku (Christain Chukwu)
But when Nigeria played Zamalek of Egypt, the song changes to
“SUKU ni baba
Okala ni baba
Bi SUKU o fori gba, won,  yoo fesi re won lule”
Chukwu is a great man
Okala is a Great man
If Chukwu does not headboot them with his head, he would fall them with his feet.
The people know the difference between long and short term interests.
Therefore, as in football, Yoruba  people know that in politics, no one should be seen as an eternal enemy.
Vengeance in politics is a self defeatist tool.
Arriving at the best interest of the people is a curve of darkness and light, gains and pains and sometimes withstanding the mud of sworn enemies.
There is nothing as precious as wisdom. It endures when that wisdom is enriched even by thoughts from those considered to be the most poor or even the most foolish for politics is an extension of war and in war, you need the brave, the wise, the foolish, the courageous as much as you need the dumb-who can be used, in the absence of mines sweepers, to  test the location of bombs at his own peril.
At this time, the Yoruba need leaders that will see the 2023 election not as a destination but as a bus stop. Its an election that will produve a leader that will save the race from the ongoing cultural genocide, the regression, the oppression, the lost of ancestral territories to armed savages, the rape of women on our farms, the killing of our kings and the violation of the sacred norms of our humanity. Resolving these issues to guarantee self determination is far more important than any other issue.
The 2023 election is only useful if it has any solution to the gruesome situation in our fatherland.
There is the urgent threat of being overwhelmed by Talibans. Whatever discussion or power struggle of Yoruba leaders that is not motivated by the struggle of the people for survival and uplfitment from the current stupor is counter productive.