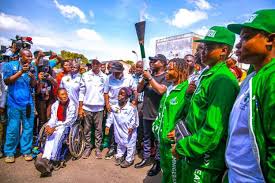 Posted By: The Gazelle NewsIn: News, SportsNo Comments
Print Email
Oyo State Governor, ‘Seyi Makinde, on Monday, 14 November, 2022, received the torch of unity in respect of the 21st National Sports Festival in Ibadan, the state capital.
While receiving the torch from athletes led by the state Commissioner for Youth and Sports, Seun Fakorede, Governor Makinde, represented by his Deputy, Barr Bayo Lawal,  charged the athletes who will represent the state at the Sports Festival to double their efforts at the festival coming up in Delta State, to ensure they win more medals for the state than they did at the previous sports festivals. 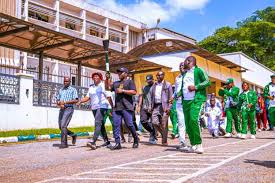 A statement by the Chief Press Secretary to Governor Makinde, Mr. Taiwo Adisa, indicated that the Governor, while receiving the torch from the state Commissioner for Youth and Sports, Mr. Seun Fakorede, said that the torch “symbolises unity and peace of the nation despite its diversity.”
He added that the Oyo State government has provided necessary facilities to promote sports development in the state, promising that the administration will do all that is required to promote sports in the state.
The torch of unity began its tour of the 36 states of the federation following its kick-start by President Muhammadu Buhari in October.
The Torch of Unity was later handed over to the Zonal Coordinator, Federal Ministry of Youth and Sports, Mr. Emmanuel Okere, who took it to Osun State.
Those who witnessed the event include the Secretary to the state Government, Mrs. Olubamiwo Adeosun; the Head of Service, Alhaja Ololade Agboola and other political functionaries.