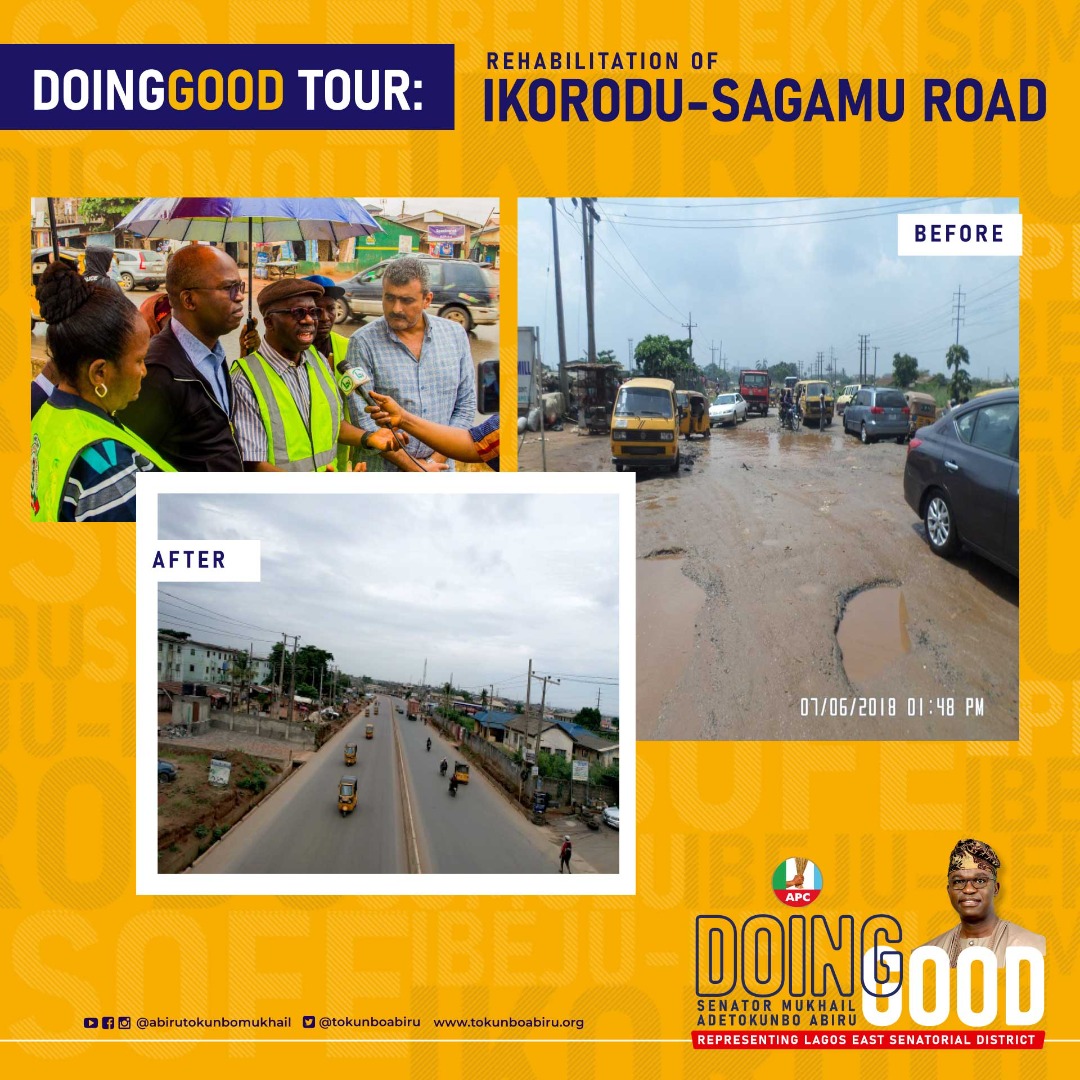 Posted By: The Gazelle NewsIn: NewsNo Comments
Print Email
The Chairman, Senate Committee on Industries and Senator representing Lagos East Senatorial District in the Senate, Senator Mukhail Adetokunbo Abiru, FCA and officials from the Federal Ministry of Works and Housing, led by Engr. Adedamola Kuti, Director, Highway Southwest, and representatives of the Contractor, Arab Contractors, led by Area Manager, Huzem Monuir, on Friday, 19 August, 2022 inspected the reconstructed Ikorodu/ Sagamu Road which is almost completed.
Despite torrential rain on Friday, motorists had hitch free journey on Ikorodu/Sagamu road that used to be a dreaded nightmare for commuters, motorists and residents. 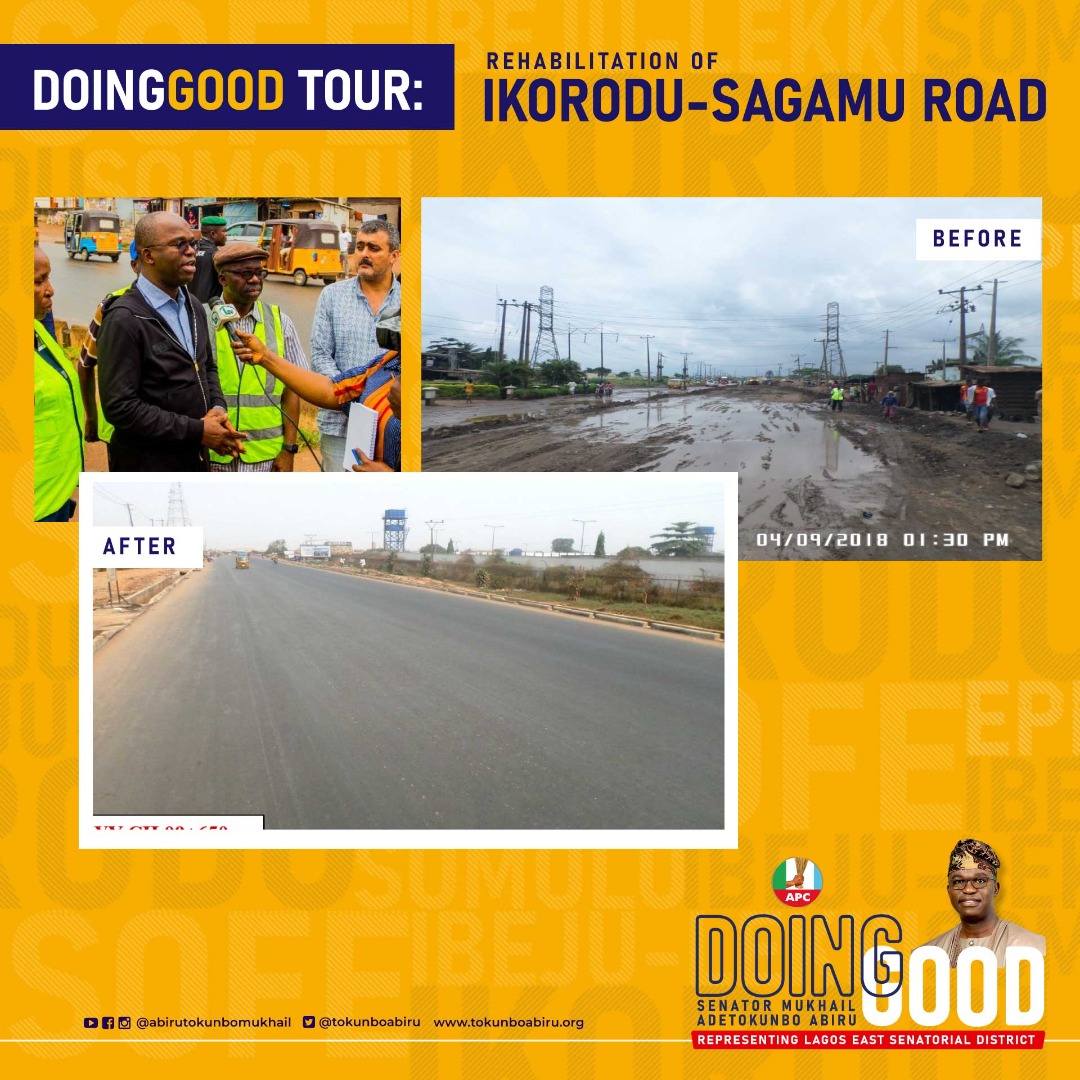 The 30km Ikorodu/Sagamu was in a deplorable condition for almost 40 years due to neglect until 2018 when the Federal Government awarded the road for reconstruction. However, due to paucity of funds, the work dragged on causing unimaginable pains for commuters, motorists, companies and those living along the corridor.
Senator Abiru, when he was seeking the mandate of the people of Lagos East during the 2020 Senatorial bye-election, promised to take pragmatic steps to ensure that the road is completed. True to his words, the Senator got to work shortly after he was sworn in as the Senator of the Federal Republic of Nigeria.
On Wednesday, April 28, 2021, on the floor of the Senate, Senator Abiru moved the motion titled, “Motion On The Urgent Need For The Rehabilitation Of The Ikorodu-Shagamu and Ikorodu-Itoikin- Epe Roads To Further Bridge The Infrastructure Gap And Enhance Economic Growth In Nigeria”. The Senate unanimously supported the motion  and approved the prayers for the roads to be urgently attended to.
In order to make the motion effective within the shortest possible time, Senator Abiru met with the Minister for Works and Housing, Mr Babatunde Raji Fashola (SAN) on how the affirmation can be implemented.
Abiru said: “The Minister explained that the major challenge of the road was paucity of funds based on the yearly budget constraints. He however assured based on the steps I had taken so far to include the funding of the road (Ikorodu Sagamu) under the Sukuk Financing Scheme, which is an assured funding scheme for road infrastructure.
“So, as you have seen as we journeyed on this road, the major improvements you saw from Sabo to LASPOTECH First Gate, Odogunyan, Ita-Oluwo, Ogijo, Gbaga, Sotubo, Mosimi, Thames Valley International School to Gbara Village are the fruitful results of those efforts we made.
“According to the contractors, the work progressed from 25% to 75% in less than a year due to the Sukuk Funding I facilitated through the Minister.  I want to express my profound gratitude to President Muhammadu Buhari, Minister Fashola for allocating the highest sum of the Sukuk 4 Bond they raised in December 2021 to Ikorodu/Sagamu Road.
“From Eyita, around Sabo Ikorodu to Gbara Village, about 22 Km had been completed, remaining about 8 km to reach Sagamu.
“I remember in 2021 when we journeyed on this road, it took us 2 hours but today in less than 30 minutes, we have travelled to and fro and that is efficiency and that is what brings prosperity and the is the kind of focus we should have in meeting the infrastructural deficit we have in this country”.
Engr. Adedamola Kuti, Director, Highway Southwest, Federal Ministry of Works, while explaining the road design and materials used. He said the road was partly concrete and Asphalt built to withstand heavy duty trucks that ply the road.
He said, “A portion of this road is built on flexible pavements, that is the normal aggregate and Asphalt and we have another section that is built on rigid pavement, that is concrete construction. We have the combination of the two. Just like the Distinguished Senator mentioned, we have a lot of metal fabrication companies along this road, so this road has been built to take care of all those things.
“Even what we have done in some sections, we have done only to binder course, and you will see that you won’t see any failure on it before we now put our wear in on it. The road is built to last”.
Huzem Monuir, Area Manager, Arab Contractors Company, thanked the distinguished Senator for his contribution to the fast pace of work on the road through Sukuk bond. “We have achieved 50% progress in less than a year”, Monuir said.
On Ikorodu/Itoikin Road, Senator Abiru said the same motion had also brought the attention of the Federal Government to the deplorable state of the road.
“Based on the follow up representations to the Minister,  a resolution to rehabilitate the road has commenced, but it has to follow necessary procedures of procurement and award of contracts as laid down by law.
“Again, I have been following up on the situation, and I can assure you that progress is being gradually achieved based on extant law on contract awards”, he assured.
The Senator proceeded to the Lagos State University of Science and Technology (LASUSTECH), formerly known as LASPOTECH to inspect the 40-bed Hospital and Dental Centre and 200 Solar-powered street lights he facilitated to the university community and neighbouring communities.
Abiru visited the site in the company of the acting Vice-Chancellor, Dr. Nurudeen Oluremi Olaleye and his management team. The Acting VC commended the Senator for the projects he facilitated to the institution and also Ikorodu Sagamu Road reconstruction.
Senator Abiru said, “These projects among other laudable interventions I have prioritised under my three-pillar agenda, which are: Legislative Role, Empowerment/Facilitations and Endowment are geared towards providing greater good to a larger number of our people.
“From the 960 mini-Stadium and the remodelled Oluwo Fish Market in Epe to 40-bed hospitals that we facilitated in Isiu, LASPOTECH (now, LASUSTECH) and Mascara Health Centre in Agboyi-Ketu to schools and the first of its kind Innovation hub, Senator Abiru Innovation Lab (SAIL) and many more are envisioned to lift our people from squalor and ensure better life for all”.