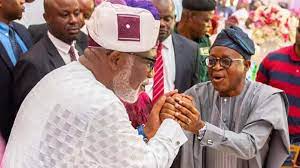 Posted By: The Gazelle NewsIn: NewsNo Comments
Print Email
Governors Rotimi Akeredolu of Ondo State and Adegboyega Oyetola of Osun State on Tuesday, 14 December, 2021 showered encomiums on their Ekiti State counterpart, Dr Kayode Fayemi, for his developmental strides in the State saying the Governor had done a lot to reposition the state in terms of infrastructure and human capital development.
The two governors stated this during the inauguration of the 30 kilometre Agbado – Ode – Isinbode – Omuo Road and two blocks of Faculty building at Ekiti State University, Isan Ekiti.
Present at the project inauguration were the Deputy Governor of Ekiti State, Otunba Bisi Egbeyemi, Ondo State Deputy Governor, Mr Lucky Ayedatiwa, Speaker of Ondo State House of Assembly, Rt. Hon. Bamidele Oleyelogun, former Deputy Governor of Osun State, Senator Iyiola Omisore and top government functionaries from the three states.
Commissioning the Agbado-Ode-Isinbode-Omuo road, Ondo State Governor, Mr Akeredolu, a Senior Advocate of Nigeria, commended Dr Fayemi for his laudable achievements in the state admitting that he is doing a great work by consolidating on what he achieved during his first term in office and building for transformation.
Akeredolu congratulated the Governor on his rescue mission describing him as a great man traversing the firmament of Ekiti with great marks, adding that the Governor is able to do so much with little resources because of prudence and genuine love for the people and passion for development. He noted that the Agbado-Ode-Isinbode-Omuo road would play a dual role of assisting farmers to easily get their produce to the market as well as connecting the State to the northern part of the country. 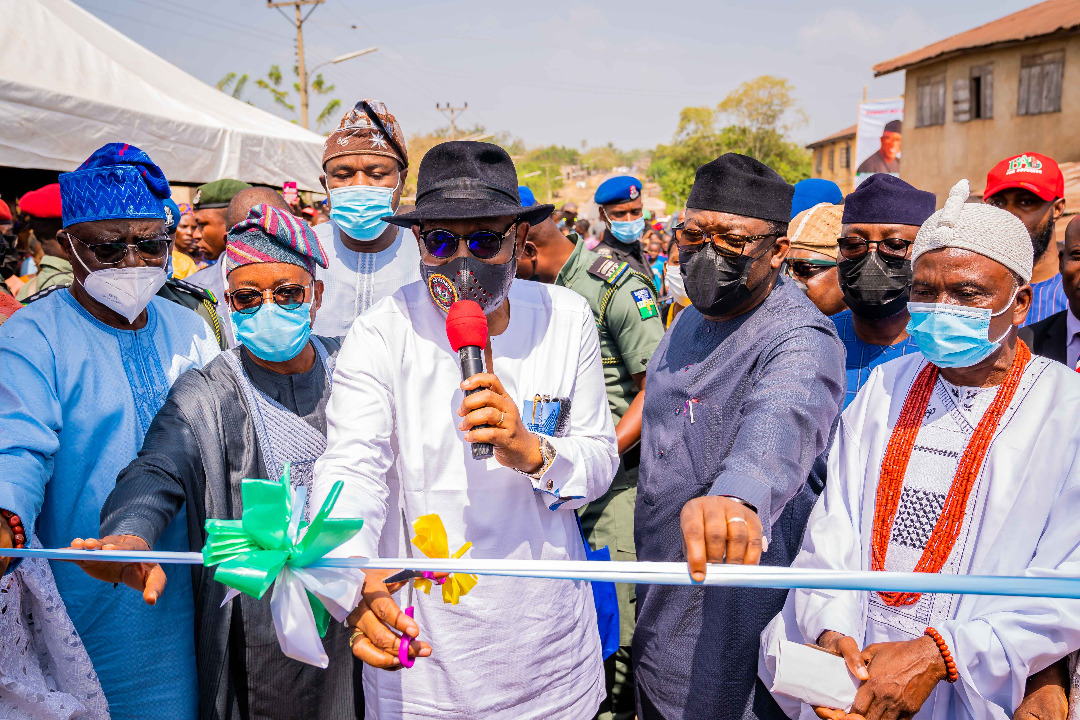 Also speaking while inaugurating the two blocks of faculty building at the Ekiti State Polytechnic, Isan Ekiti, Osun State Governor, Alhaji Gboyega Oyetola appreciated the honour to commission the project saying that the belief of Governor Fayemi that functional education and entrepreneurship are the solution to the vast youth unemployment besetting the nation attest to his resolve to improve infrastructure development of the State and get the contemporary capacity building right in order to ensure all round and sustainable development.
He said Governor Fayemi’s passion for development is reflected in the importance he attached to education and human capital development.
Welcoming his colleagues to the project inauguration exercise, Dr Fayemi said his administration was poised to restore Ekiti values, and continue to pursue the lofty goal of developing the state not minding the daunting financial challenges being faced by the State.
The Governor reiterated that he would not allow the dwindling resources of the state to discourage execution of impactful programmes and projects so as to deliver more dividends of democracy to the people in fulfilment of his social contract with them.
He revealed that the road project was awarded for reconstruction during his first term in office in 2014 but was abandoned by succeeding administration adding that he had to revisit the project to completion in fulfilment of his promise that no project will be left uncompleted by his government. 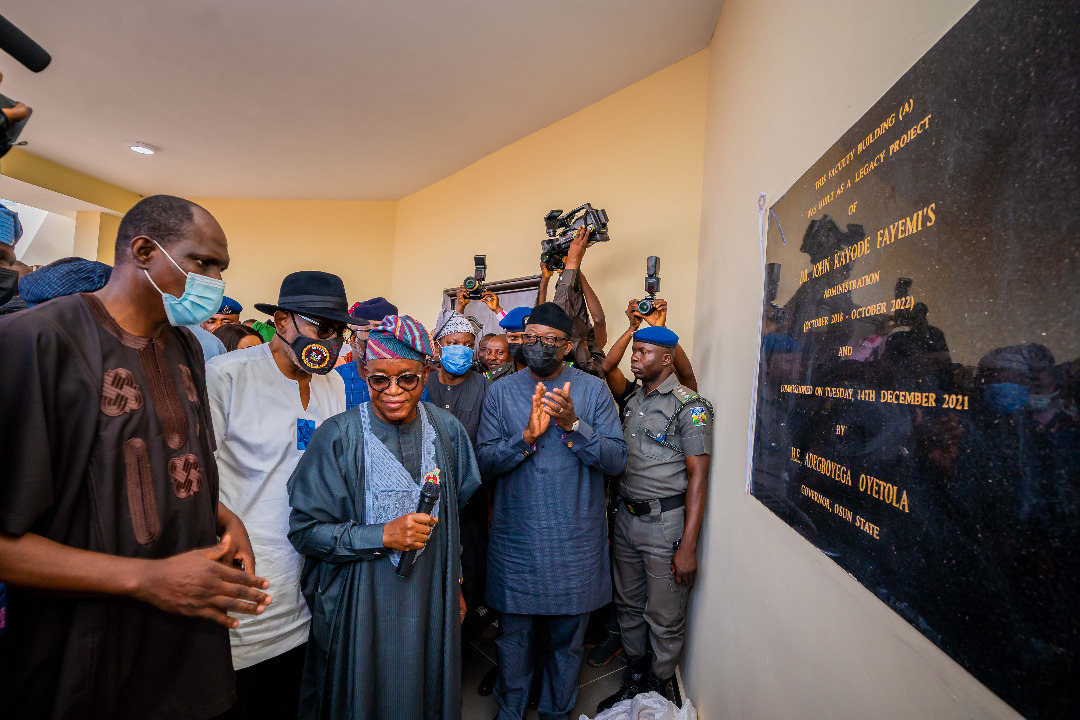 While affirming that the road would serve as a shorter link from Northern part of Nigeria, through Kogi State to Ekiti State Capital, Dr Fayemi said he was glad that the then 30.5km road abandoned in the past was being inaugurated.
At the Ekiti State Polytechnic,Isan Ekiti,  Dr Fayemi stated that construction of legacy projects has become his administration’s trademark in laying a sustainable foundation for the development of our State adding that he adopted this approach to developing Ekiti State in response to the weak and often non-existent institutions of democracy and good governance inherited from the past Administration.
The Governor noted that beyond providing the two structures to address the accommodation challenges of workers and students, government has also enhanced the environment of the Institution to make it remain a worthy legacy of change in the Institution.
He commended the contractors who handled the projects for doing quality jobs and delivering in record time.
According to him, “These magnificent two blocks of Faculty Building was designed to accommodate two (2) Faculties, with Dean’s Office, four (4) HODs’ Offices, four (4) Laboratories, twelve (12) Classrooms, a Conference Room, a Faculty/Data Room, twenty-eight (28) Offices for Lecturers and Conveniences are fully equipped. You will all agree with me that this was indeed purpose-built.
“We are changing the face of Ekiti State Polytechnic, Isan Ekiti because we believe that our people deserve the best and we are not relenting at providing the necessary support needed for its success. That is why we have gone beyond the restoration of infrastructure alone, but commence from the scratch to laying the foundation for all the institutions that can help develop our State, including but not limited to the Ekiti State Civic and Convention Centre, Ado Ekiti, New Ado-Iyin Dual-Carriage Road among others.”

#COVID-19: #NIMC Shuts Down All Centers in Five States