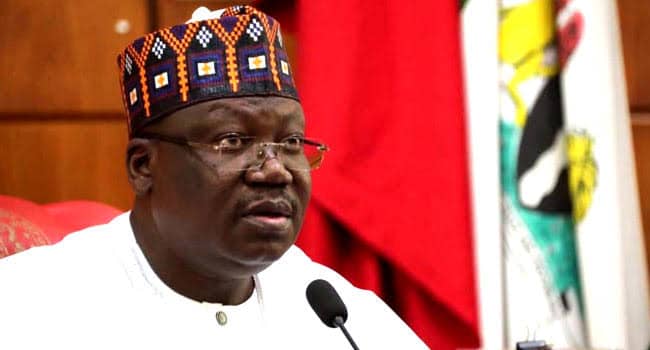 President of the Senate, Ahmad Lawan, has said the out-of-school children is a big challenge facing Nigeria as a nation.

According to the Senate President, the problem constitutes not only social but security problems to the country as a whole.

Lawan stated this in his concluding remarks on a motion on “The Need to Integrate Almajiri Education into Modern System of Education in Nigeria.”

“We all know that the out-of-school-children are at the moment a big problem to us as a country.

“They constitute not only social problems, but also security problems to some  extent.

“Therefore, it is our responsibility to do whatever we can to ensure that they are enrolled in primary and secondary schools,” the Senate President said.

Sponsor of the motion, Senator Adamu Aliero (APC – Kebbi Central), noted that over the years the Federal Government of Nigeria had made efforts to reduce the menace of street begging by introducing the Universal Primary Education (UPE) Scheme in 1976, and re-introduced the Universal Basic Education (UBE) in September, 1999.

The lawmaker noted that the Almajiri happens to be one of the persons covered by the UBE Act 2004, for the purpose of provision of basic education.

Citing findings by the United Nations International Children’s Emergency Fund (UNICEF), Aliero said, “We have more than 14 million out-of-school children, most of them being Almajiri roaming the streets of our major cities in Nigeria begging for alms and food.”

According to the lawmaker, the past administration of Goodluck Jonathan embarked on a laudable project by building Almajiri integrated model schools in which these children are enrolled and given both Islamic and a Western education.

He lamented that currently, “some of the structures are either laying fallow or put into uses other than what they were originally intended for and some of the facilities in the Almajiri Model Schools are already decaying as they have never been put to use.”

Aliero recalled that two weeks ago, the Governor of Kano State, Abdullah Ganduje, announced the ban on street begging and launched the Basic Education Service Delivery for All (BESDA), a policy which penalizes parents or guardians of children caught begging on the streets.

He added that other states such as Nasarawa and Niger have since followed suit with the introduction of the Child Rights Protection Executive Order by the former; and the setting up of a committee to fine-tune the modalities for the policy’s implementation by the latter.

In his contribution, Senator Sabi Aliyu Abdullahi (APC – Niger North) said the quest to address the problem of out-of-school children is one of the legislative agenda of the Ninth Senate.

The lawmaker while x-raying the problems associated with out-of-school children said, “Within the context of the north, most of the out-of-school children are the Almajiris, and I think that the fact that some states in the north are finally rising up to the occasion shows that this issue requires our attention and is long overdue.

“These parents just take them and dump them on some of these Mallams, who in turn are also exploiting the children.

“I think the bottom line there is that we must acknowledge that no matter how well other children are educated, no matter how well we give education to our children, these children that are abandoned in the name of Almajiri system will come out to be the key determinants of the success and progress of our own children.

“Because those who are left unattended to and uneducated, will definitely in time grow up to know nothing other than to be recruited into criminality and other vices which are now the order of the day.

“Mr. President and Distinguished Colleagues, if you are following the spate of kidnappings and the reports we are getting, many of these children are actually the kidnappers and even those who are involved in banditry, are products of the same system we are talking about,” Senator Sabi lamented.

Accordingly, the Senate in a three-point resolution called on the Federal Government to upgrade the existing Almajiri model schools and build more to increase the number of school enrollment, thereby reducing the number of out-of-school children on the streets.

The upper chamber urged the federal government to mandate its committee on Basic and Secondary Education to come up with ways and means of collaborating with state governments on how to enroll the fourteen million children out of school.

Similarly, it also charged the National Orientation Agency to initiate a sensitization program specifically on the issue of the Almajiri and its negative impacts on children in the society, especially in the northern part of Nigeria.