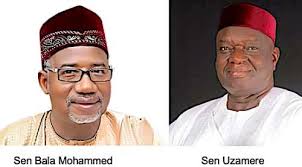 An Assignment For Sen Uzamere

Posted By: The Gazelle NewsIn: News, Opinion, PoliticsNo Comments
Print Email
By Udenta O Udenta I chuckled when I read Sen Uzamere’s diatribe against Sen Bala Mohammed, his campaign organization and myself. I chuckled because I know his intent: draw the Sen Bala Mohammed Campaign Organization to the putrescent catacombs of his banal mind and distract it from unfurling the full potentials of Sen Bala Mohammed’s grand Nigeria First Governance Vision. In essence, waiting for Udenta’s “Dirty War” in the mind of a political rascal and nonentity like Sen Uzamere is akin to Waiting for Godot- assuming that he has ever heard such an expression in his philistine like mode of existence.Sen Bala Mohammed, flush from his decisive validation by his people via the Consensus pronouncements- the source of Sen Uzamere’s hatred and envy- has already commenced his broad based consultations with PDP delegates with only one strategic intent and purpose- a decisive victory at the primary election.While Sen Uzamere wallows in the putrid universe where his ilk dwell, unsure if the ghost of Alamieyeseigha will haunt him to no end or if his cell inside the EFCC is still kept ready for him having being their disgraceful customer many years gone by, Sen Bala Mohammed campaign has being blazing away across the length and breadth of the land. Uzamere is looking for someone to enliven his very drab, inconsequential and perfidious existence but he won’t be getting that from me or Sen Bala Mohammed campaign organization.We will rather give him an assignment since he seems to be questioning my credentials as a Professor. The Sen Bala Mohammed Campaign Organization is ready to donate to Sen Uzamere a hard back set of my 21 books, with a charge to read and understand my six volume Boyhood Works written between the ages of 13 and 15- because I sincerely don’t know when he last read a book. A reward awaits him for this simple labour because asking him to read and understand my Revolutionary Aesthetics and the African Literary Process, Autonomy of Values and Crisis of Theory may lead to a psychiatric situation, and I say this very seriously.On a final note, Sen Bala Mohammed’s campaign organization still believes that we don’t really know who has set Sen Uzamere on this self destructive path and for what purpose. If such entities are Muslims they clearly miss the essence of the Sallah season of purification already upon us, even as we beg Almighty God to forgive him and his dark and unconscionable patrons their transgressions against his name and humanity.NB: Regrettably this will be my last communication with an amorphous and morally confused fellow like Sen Uzamere on the expectation that the Atiku Abubakar Campaign organization clearly distances itself from him and denies him prop. But if that campaign condones his mindless attacks on Sen Bala Mohammed we will respond in equal measure and regard.