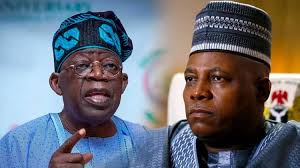 Posted By: The Gazelle NewsIn: News, PoliticsNo Comments
Print Email
The Senate President, Ahmad Lawan said on Tuesday that the All Progressives Congress(APC) lawmakers across the country are totally committed to ensure victory for the party at the 2023 Presidential poll.
Lawan gave the assurance in Jos at the flag off of the APC Presidential Campaign which was also attended by President Muhammadu Buhari.
The Senate President delivered a goodwill message on behalf of the APC lawmakers both at the National Assembly and State Houses of Assembly.
“Distinguished Senators and members of the House of Representatives have asked me to assure you Mr President, that we are totally committed to ensuring that our Presidential candidate and his vice are returned elected and are sworn in as President and Vice President on May 29 next year by the Grace of God.
“Mr President, I am also speaking on behalf of all members of the state Houses of Assembly of APC extraction across the country…We represent the largest group of APC stakeholders across the country.
“Mr President, I assure you that because we are at the grassroots, we represent the people. We are going to leave no stone unturned to ensure that our presidency is intact. That the National Assembly’s return is more than 75 percent to ensure that our next President enjoys a very harmonious working relationship with the Legislature.
“Mr President, you know the benefits of working harmoniously between the Legislature and the Executive arm of government. We have seen the benefits.
“Today, so far, you are the most successful President since the return to democracy in this fourth Republic. Successful in the sense that you have executed more projects. You have signed more Bills than any of your predecessors even though you have spent only seven and half years. Put together, they spent 16years but they did not sign as many Bills as you did.
“Mr President, you are the hero of infrastructural development in Nigeria. Our next President will build on that. You are constructing roads all over the country….
“PDP was in power for 16 years. They had the most resources, yet they had the least infrastructural development throughout the 16 years.
“We are very optimistic that just the way you started, with excellent performance in the area of infrastructure, our next President by the Grace of God, His Excellency, Distinguished Senator Ahmed Bola Tinubu will build on it,” the Senate President said.

Nollyfans Set To Honour Egba Chief, Gospel Artiste, Others For Achievements In Their Professions

Jonathan, Fayemi, Abike-Dabiri, Odinkalu Others for Honours At Maiden Freedom Of Information Awards