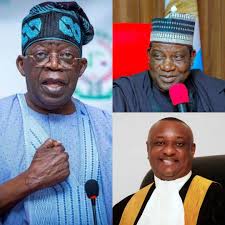 Posted By: The Gazelle NewsIn: NewsNo Comments
Print Email
The All Progressives Congress has unveiled Plateau State Governor Simon Lalong as the Director General of its Presidential Campaign Council.
The APC made the announcement when the National Chairman, Senator Abdullahi Adamu; Presidential Candidate, Asiwaju Bola Tinubu and his running mate, Senator Kashim Shettima came to brief President Muhammadu Buhari on Thursday, 4 August, 2022.
The party also announced the appointment of Minister of State Labour and Employment Festus Keyamo as the campaign spokesperson.
Katsina-born lawyer Hannatu Musawa will serve as Keyamo’s deputy.
“We are on the same with Mr. President as regards the organizational structure of our party’s presidential campaign. The person that will lead the campaign as DG is Governor Simon Lalong. The spokesperson of the campaign is Festus Keyamo and Hannatu Musawa is his deputy,” Adamu said.