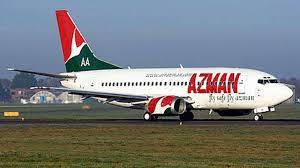 Over 1,000 staff of Azman Air will be directly affected if the Nigerian Civil Aviation Authority (NCAA) does not soft-pedal and lift a suspension order it placed on the airline.

PRNigeria gathered that the airline was on Tuesday grounded by NCAA over safety reasons.

In the wake of NCAA’s hammer, Azman announced the cancellation of all its flights between Tuesday, 16 March, and Friday, 19 March, 2021. The development left many passengers who purchased the airline’s tickets stranded.

Azman, earlier on Tuesday, 16 March, 2021 took to its Twitter page, saying it was suspending its operations due to a safety audit by the NCAA.

The NCAA arrived at the decision to suspend the airline after its management meeting on Monday, 15 March, 2021.

The Director-General of the NCAA, Captain Musa Nuhu, who announced the suspension in a statement, said the decision followed a series of incidents involving the airline’s Boeing 737 aircraft and in pursuant to Section 35 (2) of the Civil Aviation Act, 2006, and Part 1.3.3.3 (A) of the Nigeria Civil Aviation Regulations (Nig.CARs) 2015.

According to him: “The suspension is to enable the authority to conduct an audit of the airline to determine the root causes of the incidents and recommend corrective actions to forestall reoccurrence.”

But a top official of Azman, who declined to give his name, told PRNigeria that the airline operated within the established rules and that their aircraft are in compliance with the aviation standards.

“Flying an average of 2,000 passengers and generating over ₦80,000,000 revenue daily in revenue, our airline ensures the safety of our passengers, aircraft, including the parts, processes, and operators. In fact, we keep up with the maintenance and certification in ensuring the aircraft are worthy of flying.

“Considering our contributions to Nigeria’s economy and our enviable safety record which has been commended by the industry players with over 1,000 staff on the airline’s payroll, we appeal to the authority to review this suspension,” the official said.

Azman, a leading airline in the North, was Established in 2010 by a businessman Abdulmunaf Yunusa Sarina. The airline operates scheduled domestic passenger services with its main base in Mallam Aminu Kano International Airport and flew thousands of passengers across the region and beyond.

The airline’s routes in the North included Kano, Maiduguri, Kaduna, Gombe and Birnin Kebbi while it had also flown passengers to Benin, Owerri and Asaba in Delta State. It operated 15 flights daily and all of them had been affected by NCAA’s suspension.