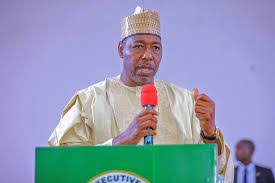 Posted By: The Gazelle NewsIn: News, TechNo Comments
Print Email
Borno State Government has awarded a road contract of N2.8 billion to an indigenous construction company, Obtuse Tech Engineering and Construction Company limited.
The contract, which is the construction of 8.2 kilometers road within Maiduguri Metropolis, the state capital was awarded to the company in order to encourage the growth of Nigerian business and encourage the economy of indigenous people.
According to the Permanent Secretary, Ministry of Works, Engineer Ali Goni Lawan, who spoke at the official contract signing ceremony at the weekend, the  project consists of Baga road market- Jajeri – Umarari- Bulabulin with another one linking Texaco- Churchkime – Abdu One road.
Lawan recalled that, in September last year, a tender/bid documents in respect to these projects were advertised in some national dailies, after which, companies were invited for the bid, adding that, Obtuse Tech Engineering Company won and considered to execute the projects.
He said: “The construction works is from Baga road market- Jajeri – Umarari- Bulabulin with another one linking Texaco- Churchkime – Abdu One road at the total cost of N2,812,405, 577.48.”
He added that: “These projects were approved by our committed and patriotic governor, Professor Babagana Umara Zulum, and is expected to be completed and commission before the end of this year 2022.
“I want to sound a strong warning that substandard work would not be compromised by the present administration, therefore, I enjoined you to do a thorough and good job for the betterment of humanity.”
The Managing Director, Obtuse Tech Engineering and Construction Company, Engineer Umar Sheriff Lawan who spoke to journalists after the ceremony, said his company has been in the business of construction works in the last 10 years and has executed several standard road projects all across the state.
He assured deployment of his professional team of engineers/workers to site immediately to complete the projects within the specified 365 days as stipulated in Terms of Reference (ToR).
He commended Borno State Government under the leadership of Professor Babagana Zulum for considering his company worthy to execute the projects, and assured that they will do everything possible to meet specifications.