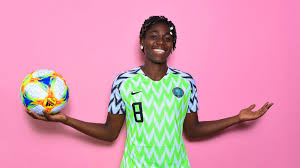 Share
Facebook Twitter LinkedIn Pinterest Email
Super Falcons forward, Asisat Oshoala won a record fifth African Female Footballer of the Year at the African Football Award in Rabat, Morocco, on Thursday, 21 July, 2022, reports thegazellenews.com
Oshoala, the Barcelona of Spain striker, became first African Footballer, male or female, to win the best footballer award for fifth time.
She beat off competition from Ajara Nchout of Cameroun and Grace Banda of Zambia to win the award.
Oshoala was rewarded for a stellar season in Europe where she won the Pichichi award for the highest goal scorer in the Spanish Female League despite playing fewer matches because of injuries.
She won the league and cup with Barcelona and reached the final of the UEFA Champions League with Barcelona.