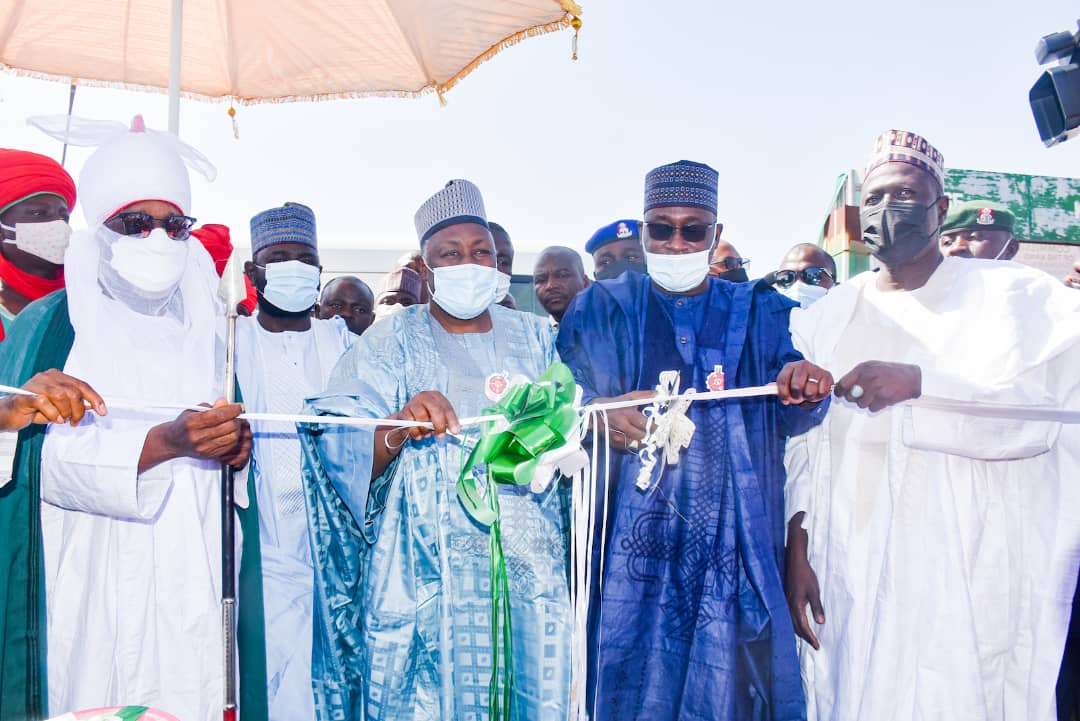 The investments of the Federal Government in road transport infrastructure has continued to impact positively on communities across the country as President Muhammadu Buhari on Monday, 13 December, 2021 commissioned the Kano-Maiduguri Road, Section II (Shuwarin-Azare) connecting Jigawa and Bauchi States.

The 142.2 kilometre dualized road brings to five the number of such roads commissioned and handed over across the country in the Season of Completion and Impact which began 18 days ago.

The other roads so far commissioned by the President within the period include the Sokoto-Tambuwal-Jega-Kontagora-Makera Road, the Vandeikya- Obudu Cattle Ranch Road, the Nnewe-Oduma Road, and the Kano- Maiduguri Road Section III (Azare-Potiskum).

In his address at the event, Buhari, who was represented by the Minister of Water Resources, Engr. Suleiman Adamu, called on Nigerians, especially the communities through which the roads pass, to take ownership and protect the roads, which, according to him, “have been built to the highest quality of design and workmanship” in order to enable them last their designed lifespan.

The President, who also described the commissioned roads as “part of our many roads to prosperity”, told Nigerians, “Now that we have this new and well-built roads, we have duties to ourselves and to other road users”, listing such duties to include avoiding abuse of the roads and compliance with the nation’s traffic laws as stipulated in the Highway Code.

According to the President, abuse of the roads could take the form of overloading of vehicles and trucks which accelerates pavement damage, spilling of petroleum products, which dissolves all the components and allows water to penetrate, and converting the road shoulders to permanent parking places, which brings the onset of road failure from the shoulder.

“We must all do our best to avoid these practices, report them when they occur and act in a lawful manner to stop them”, the President said adding, “Accordingly, for the avoidance of any doubt, I wish to reiterate that the maximum driving speed on this and other Federal Highways nationwide is 100 (ONE HUNDRED) KM and no more”.

Paying tribute to the patriotism of the Nigerians who participated directly or indirectly in the construction of the roads, Buhari said it demonstrated the capacity of the people to build quality infrastructure that could stand the test of time adding that both those employed directly to build the roads and the scores of suppliers employed indirectly by providing the machines utilized in the construction were not only nation builders but also  the heart of the Nigerian economy.

“The road is also a story of the capacity of our people; the patriotic Nigerians who were employed directly to build this road, the scores of suppliers employed indirectly who are responsible for providing the machines utilized in the construction. These are not only nation builders to whom we offer our salutations, they are the heart of the Nigerian economy, the micro, small and medium enterprises that drive our economic growth”, he said.

He also said the roads represented “a statement of economic efficiency and ease of doing business”, adding, “This is because the travel time of averagely 3 hours before construction has now reduced to 1hour 45 minutes since the completion of the road. Of course, this road is part of our many roads to prosperity because a reduced journey time means reduced expense on travel, because time is money”.

Noting the reintroduction of such road furniture as lane markings and Route Assurance signs on the new roads as symbolizing change, Buhari declared, “These components had all but disappeared on our highways but our commitment to change has restored them, with the markings helping drivers to achieve better lane management and control of their vehicles; while the Route Assurance signs provide information about how much further or longer, the drivers and commuters have to travel and the distance to the next village, town or state”, adding that another element of change was “the travel experience on a new and well-built road from the old and previously unmotorable road.”

In his own remarks, the Minister of Works and Housing, Mr. Babatunde Fashola, SAN, said the Season of Completion and Impact which had seen the Commissioning and Handover of roads across the country in the last 18 days was a clear affirmation of the presence of the progressive administration of President Muhammadu Buhari in every State of the country.

Fashola, who was represented at the event by the Permanent Secretary in the Ministry, Mr. Babangida Hussaini, said the road projects already handed over and many that would soon be commissioned in various parts of the country represented major investment in road Transport infrastructure, which, according to him, “is a commitment of the Buhari administration as a driver for economic growth and prosperity”.

Expressing “immense pleasure” that the Season of Completion and Impact has reached the peoples and Governments of Jigawa and Bauchi States through the Kano-Maiduguri Road Section II (Shuwarin-Azare) being commissioned by the President, the Minister described the investments as “visible and incontrovertible Assets in proof of what Nigeria’s resources are invested in, from a combination of our earned resources, and borrowings”.

“After the handing over of the Sokoto-Tambuwal-Jega-Kontagora-Makera Road, the Vandeikya- Obudu Cattle Ranch Road, the Nenwe-Oduma Road, and the Kano- Maiduguri Road Section III (Azare-Potiskum), I am happy to reiterate that this is the fifth of many more project Completion and Handovers our country will experience in the next few weeks and months as we enter what l call a season of completion and impact”, he said.

Fashola, who said the handing over formalities that would follow the day’s event would be “in both the Works and Housing Sectors”, recalled the recent unveiling of a dedicated portal to enable Nigerians subscribe to the National Housing Programme of the Federal Government in 34 States where the first Phase are ready noting that finishing touches were being put to the handing over formalities in the beneficiary States.

The Minister expressed gratitude to all investors in the first and second SUKUK bond which funding helped in the completion of Azare – Potiskum, Shuwarin – Potiskum and Sokoto-Tambuwal- Kontagora Roads, adding that the SUKUK funding is currently contributing to progress of work on 44 roads across Nigeria which would also be commissioned and handed over as and when completed.

He also thanked the Ministry of Finance, and the members of the National Assembly, “especially the Chairmen of the Senate and House Committees on Works in the 8th and 9th Assembly as well as the Debt Management Office for their support and their role in previous SUKUKS which, according to him, “have been most innovative and impactful nationwide, and for the SUKUK we are expecting”.

Fashola also thanked the staff of the Ministry and contractors who, he said, “have worked very hard to bring these projects to conclusion”, adding, “I cannot fail to acknowledge the cooperation of the host communities where these projects pass through or are hosted. I hold them out as examples of what peace can achieve, and the investments that collaboration and some sacrifice can deliver if we embrace partnership with Government”.

Also commended by the Ministers were members of the Federal Executive Council in the first term and the current term without whose support during debates over the projects “none of these would have been possible” and the President and Vice President “who preside for long hours over the Council meetings”, and whose leadership “is now bearing fruits and the evidence of change now manifesting” with Jigawa, Bauchi, Enugu, Ebonyi, Benue, Cross Rivers, Sokoto, Kebbi and Niger, bearing  witness and with more to come.

Members of the host communities, who came in their hundreds to grace the occasion were effusive in their expressions of gratitude to the federal Government, President Muhammadu Buhari and the Minister of Works and Housing for the Dualization of the road which they said was an accident-prone passageway while it was a single lane road.

Leading the expressions of gratitude was the Governor of Jigawa State, Alhaji Muhammad Badaru Abubakar, who said President Buhari had done wonderfully well in all sectors adding that although the Buhari administration inherited over 300 projects where the contractors were demobilized, the administration  mobilized them”, adding, “Today we are commissioning one of them”.

“With less than the money they made Buhari is doing more than they did”, the Governor said, listing the  impact of the Buhari administration in Jigawa State to include: “several road projects, tremendous support in the agricultural sector which has increased the rice production of the state from 90, 000 tonnes in 2015 to 649, 000 metric tonnes presently”.

Other areas of impact, according to the Governor, are school feeding programme, six hundred thousand irrigation projects, health facilities, social interventions programmes such as the N- Power which provided jobs for 11, 603 young people, conditional cash transfer, trader money and so on.

Senator Sabo Muhammed, representing Jigawa South – West District and Honourable Abdullahi Ibrahim Dutse, Member representing Dutse/Kiyawa Federal Constituency, in their goodwill remarks, expressed delight and excitement over the completion of the roads in the state and thanked the Works and Housing Minister and the President for the road projects.

The Emir of Dutse, His Royal Highness, Dr. Nuhu Sanusi, in his own remarks, said the importance of the road could not be over emphasized, as, according to him, “it covers about five states”, adding, “It’s the heart of the economic activities, our gratitude  to the Federal Government is deep for making this possible”.

A cross section of residents interviewed also praised President Buhari and Works and Housing Minister for the completion of the project. Annur Muhammad, a driver, said eight years ago , the road was a single lane before the Dualization and  rehabilitation commenced, recalling that the road was prone to accidents. “But since the completion of the project, accident has been reduced to the barest minimum. President Muhammadu Buhari is God sent”, he said.

Bello Yau, a farmer from Shuwarin, commended the Federal Government for the completion of the road saying, “We are overjoyed, happiness is an understatement, we thank the Government of President Muhammadu Buhari,  for the road”, while Adamu Haladu, a student from the area, said, “We had some challenges because  the  road  which was a single lane was bad but since the road has been dualized , respite has come our ways , we thank the people in government.”

Also a resident from Bakin Kasuwa in Hadejia Local Government who came to witness the commissioning of the road said   “I came here to support the commissioning event with my Public Address System, it is a good job God bless the Ministry of Works and the Contractors for the quality job.”

Between Rashidi Ladoja And Femi Fani-Kayode