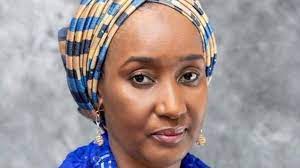 Posted By: The Gazelle NewsIn: NewsNo Comments
Print Email
Information available to The Gazelle News.com is that the Minister of Humanitarian Affairs, Disaster Management and Social Development, Sadiya Umar Farouq is on nine month course and had travelled to the United States of America for childbirth.
Farouq, who was appointed by President Muhammadu Buhari in July 2019, is by age, the youngest minister in the Federal Cabinet of the president.
She was one-time National Treasurer of the ruling party, the All Progressives Congress, APC from June 2013 to June 2014.
She was also instrumental in the party’s victory in 2015 as she served as a member of the All Progressives Congress Presidential Campaign Council. She was the chairperson of the election Planning and Monitoring, Field Operations, and Fundraising Committee.
In September last year, it was reported she got married to the former Chief of Air Staff, Air Marshal Sadique Abubakar in a quiet wedding ceremony.
Sources said she is expected back in the country after the delivery of her baby and the expiration of her maternity leave.

A Week Without Imam Shuaib Agaka

#Covid-19 Lockdown Relaxation: A Case of Survival of the Fittest