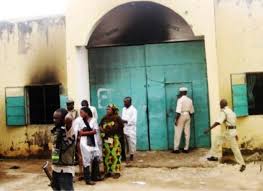 There is now calm at the Kuje Correctional Centre in the Federal Capital Territory, FCT, following a deadly attack on the facility by gunmen on Tuesday night, PRNigeria reports.

PRNigeria gathered that insurgents stormed the facility at about 10:00 p.m., detonating explosives and opening live rounds on state agents guarding the facility.

There is fear that some high-profile inmates including infamous terror masterminds could have escaped during the attack.

The prison facility holds some high-profile inmates including former Plateau Governor Joshua Dariye and his Taraba counterpart Jolly Nyame who had been granted pardons by the National Council of States.

Similarly, suspended police chief Abba Kyari and his team members allegedly involved in drug-related issues were also detained at the facility before the attack.

The numbers of casualties and freed inmates could not be confirmed as at Wednesday morning.

A statement by the spokesperson of the Nigerian Correctional Service, NCoS, AD Umar, which PRNigeria obtained, indicates that immediately after the terrorists invaded the Kuje prison, men of the Armed Squad of the Nigerian Correctional Service and other security agencies attached to the Custodial centre, were swiftly mobilised for a response operation.

“Calm has been restored to the facility and the situation is under control, ” part of the statement reads.

According to the Correction Service spokesperson, details of the response operation by troops will be made available soon.