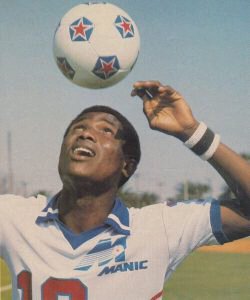 Posted By: The Gazelle NewsIn: Health, Metro, News, SportsNo Comments
Print Email
Former Green Eagles star, Thompson Usiyan is dead. This newspaper gathered that he died from colon cancer on Tuesday morning in California, USA.
Usiyan was 65 at the time of his death.
He played as a forward in his active days. The Delta indigene holds the NCAA Division I career scoring record and played in the North American Soccer League, Major Indoor Soccer League, American Soccer League and Continental Indoor Soccer League.
He was a member of the Nigerian Olympic soccer which boycotted the 1976 Olympics and made several appearances for the Nigerian national football team where he netted 14 Goals in 24 games between 1976 and 1981.
Usiyen was a prolific scorer in his days in the old Green Eagles scoring 14 goals for the national team in just 24 appearances.
Usiyen left for the United States of America immediately after the Montreal Olympics debacle which Nigeria boycotted at the last minute recalling its contingent even when they have arrived the Games Village.
It was in the middle of the World Cup qualifiers for the 1978 World Cup which took place in Argentina.
Many Nigerians believe his absence was the major reason Nigeria was unable to qualify for the 1978 World Cup in Argentina as the country was unable to find suitable replacement for him leading to its being knocked out by Tunisia via a historic own goal scored by Godwin Odiye at the Naional Stadium in Surulere.

Breaking: Many Feared Dead As 8-storey Building Under Construction Collapsed In Owerri