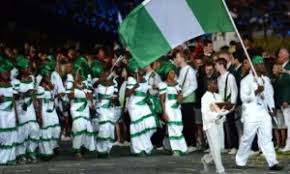 Posted By: The Gazelle NewsIn: NewsNo Comments
Print Email
The first batch of Team Nigeria athletes to the just concluded Commonwealth Games in Birmingham has been given a heroic welcome by the Federal Government on their arrival after their successful outing.
Receiving the athletes and their officials at the Nnamdi Azikiwe International Airport today in Abuja, the Minister of Youth and Sports Development, Mr Sunday Dare applauded the excellent performance of the Team which led to the harvest of 35 medals, lifting the country to the 7th position on the world record of sporting countries.
Represented by the Permanent Secretary, Federal Ministry of Youth and Sports Development, Alh. Ismaila Abubakar, the Minister expressed the joy of the entire country over their outstanding achievement, which was the first in the history of the nation
According to him, the character and discipline exhibited by the Team in Birmingham as well as the hardwork and resources committed by the present administration to sports
added up to make the Team excel at the World level.
“We are proud of you. We are also ready to give you all the support needed to make you soar higher and higher” he said.
The Minister particularly thanked God for granting the athletes journey mercies back to Nigeria while also appreciating President Muhammadu Buhari for creating the enabling environment that ensured the realisation of the 2022 Commonwealth Games
Dare further thanked the top management and staff of the Ministry, the Nigeria Olympic Committee, (NOC), led by Engr. Habu Gumel as well as the coaches and officials for their commitment to the development of sports in the country.
Earlier, the Permanent Secretary, Federal Ministry of Youth and Sports Development, Alh. Ismaila Abubakar commended Team Nigeria for lifting the country’s flag high among the committee of nations.
The Permanent Secretary who was represented by the Director, National Sports Festival & Para Sports (NSF & PS) Department of the Ministry, Mr. Peter Nelson reiterated the Ministry’s avowed commitment to ensuring the realisation of the present administration’s policy thrust in the area of youth and sports development.
Speaking on behalf of the athletes, the two-time Commonwealth gold medallist and Tokyo 2020 silver medalist, Blessing Oborodudu, thanked President Muhammadu Buhari for all his support to the Team, describing him as the father of sports in contemporary Nigeria.
She also appreciated the Minister of Youth and Sports Development, Mr Sunday Dare; Permanent Secretary, Alh. Ismaila Abubakar; and other top management staff of the Ministry, the Nigeria Olympic Committee (NOC)   as well as their coaches for giving them the much needed support and opportunity to do the nation proud at the Commonwealth Games.
Oborududu stated further that the athletes put in their best for the Nation because of the enormous encouragement of the Federal government and sports loving Nigerians pledging that they will continue to do Nigeria proud in subsequent competitions by breaking new and enviable world records.

Man Shoots Landlord To Death For Sleeping With His Wife; I’m Ready To Face Consequence, He Says