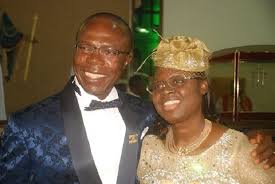 Posted By: The Gazelle NewsIn: NewsNo Comments
Print Email
Billionaire businessman, founder and Chief Executive Officer of Coscharis Group, Dr Cosmas Maduka, has lost his wife, Charity.
The late Mrs Charity Maduka, the Vice-President of the Coscharis Group, died on Saturday evening, 27 November, 2021 in Nnewi, Anambra State.
The deceased was a co-owner of the company founded by her husband. Cosharis is the combination of the couple’s name- Cosmas and Charity
“In her capacity, she was once the Executive Director supervising the Administrative, Legal, Works/Maintenance, Export, Technologies teams of the organization from 1984 – 2003. Under her tutelage, she was able to grow the business by creating value via the various strategic departments she supervised within the organization.
“As a board member of the group, in the year 2005, she later became the Executive Chairman/COO of two of the subsidiaries of the Coscharis Group namely Coscharis Beverages Limited and Coscharis Properties Limited respectively,” the profile read in part.
The deceased was also a professional teacher and caterer. She attended Teachers’ Training College, Nsugbe in Anambra State from 1979 to 1981. Also attended Consertum Institute of Catering and Hotel Management, Idi-Araba, Lagos State from February to July, 1983.
She had a brief stint as a teacher at Akamili Central School, Umudim – Nnewi between October and December 1981. Also at Tolu Primary School III, Tolu Village, Ajeromi Ifelodun / Apapa, LGA, Lagos between January 1982 and January 1983. She has equally attended various Leadership and Entrepreneurship training seminars/courses both home and abroad.
Mrs Maduka got married to Dr Cosmas in 1978 and the union produced three sons and a daughter.