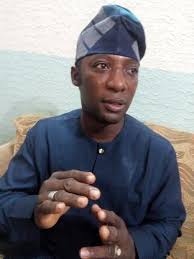 Yoruba social cultural cum self determination  group,the Coalition of Oodua Self-determination Groups (COSEG) has for the reaffirmed that its Secretary, Razaq Olokooba remains suspended since last year and he is not acting on behalf of the organizational, The Gazelle News.com reports.
The organisation, The Gazelle News.com reports further, also urged members of the public not to engage in any dealings with him on behalf of the organization.
This warning and reaffirmation was made by the Chairman and the Publicity Secretary of the organization, Comrades Ifedayo Ogunlana and Dele Daramola respectively through a statement released in Lagos.
They stressed that the antics of the suspended Secretary necessitated the leadership of the organization in wielding the big stick last year and he has refused to desist from his desperate act and destructive tendencies.
Reacting to one of his recent desperate acts, COSEG stated that “it’s rather absurd ridiculous, embarrassing and illogical to see the suspended Secretary of COSEG, Comrade Rasaq Olokoba calling himself a Convener of an existing group of long history while also dropping the name of a great former chairman of COSEG, Comrade Wale Balogun  as his Political Secretary. Comrade Wale Balogun  personally resigned his leadership and withdrew his group (YOREM) membership of COSEG some yeras back through a widely circulated press statement. We do not see this contradiction of positions as only funny but also seen as an overated ego of a pumpous,  suspended  Secretary of Coseg coordinating council calling a former full executive chairman of same COSEG as his political Secretary”
Continuing COSEG said, “it’s  an absurd and disrespect to the former chairman.
Is this not laughable and berate all sense of logic and reasoning. We wish Rasak Olokooba should learn from history and stop his
wild goose chase to perdition. His present predicament that we note as Yoruba call it ” ajegbodo to wa eni kunra”.
The group also posited that the Convener and Political Secretary positions are alien to present structure of COSEG and advised  the suspended Secretary, Rasak Olokoba to find something else doing or continue to run his self sponsored 72 groups he has been cajololing Nigerians with.
“We wish to re affirm Rasak Olokoba’s indefinite suspension and we call on all able  investigative journalists to refrain from dealing with him as COSEG leader,  COSEG has not lifted his suspention. Whoever is dealing with him is dealing with him at his own peril and clearly such person is having a hand in the destruction of a formidable Yoruba group of history and history will not judge the people well,” the statement said.