Posted By: The Gazelle NewsIn: No Comments
Print Email
By Dare Ojelade, Lagos
The decision to extend the work-from-home order by the Lagos State Governor, Babajide Sanwo-Olu, for Grade Level 14 and below is generating confusion among civil servants in the state, particularly those in the teaching genre, reports The Gazelle News.com.
On Saturday, 16 January, 2021, Governor Sanwo-Olu extended the work-from-home order to Monday, 1 February, 2021. Earlier, the civil servants are expected to fully resume on Monday, 18 January, 2021 but the state government pushed the full resumption forward to Monday, 1 February, 2021.
The state Head of Service, Hakeem Muri-Okunola announced this via a memo released on Friday, 15 January, 2021 stating that the decision was to curtail the rising cases of coronavirus in the state.
According to the memo, civil servants from Grade Level 01 to 14 are expected to work from home except those on essential duty.
This is where the confusion comes in, especially for teachers. Earlier, on Friday, 15 January, 2021, the state Commissioner for Education, Mrs Folasade Awofisayo, had announced the resumption of academic activities for both private and public schools in the state for Monday, 18 January, 2021.
With the announcement by the HoS, are teachers in public schools not civil servants? Of course, they are. Does the HoS memo applied to teachers in public schools in the state? The fact that the memo was sent to all the Tutors-General and the state Basic Education Board (SUBEB) confirmed that the memo applied to the teachers.
It is a fact that about 75 percent of teachers in public primary and secondary schools in Lagos State fall within the Grade Level 14 and below, meaning the public schools in Lagos will open on Monday, 18 January, 2021 without 75 percent of the teachers in class.
“I’m on Level 8. The Commissioner said we should resume but the HoS memo negates this. Don’t know what to do. I think the state Government needs to clarify its order. Or are we now classified under essential services? A teacher who teaches in a secondary school in Orile Agege told The Gazelle News.com on Saturday, 16 January, 2021.
Another teacher, who teaches in a public primary school in Ikeja told our correspondent that she still in a dilemma over the two conflicting directives. “Certainly we need more clarification on these conflicting orders,” she said.
According to an official of Education 3 who preferred anonymity, those ordered to work from home are the main working class of the teaching profession in the state. “They are in the majority and the implication is that most of the classes will be devoid of teachers on Monday,” she said.
Parents are also feeling confused. Some of them who spoke with The Gazelle News.com stated that they will observe situation of things on Monday, before allowing their children to head for school.
Our correspondent sought the reaction of the state Commissioner for Information and Strategy, Mr Gbenga Omotoso, he neither picked our calls nor respond to our text messages. As at the time of writing this report, he has not responded to our enquiries on the position over the matter.
Below is the memo from by the HoS: 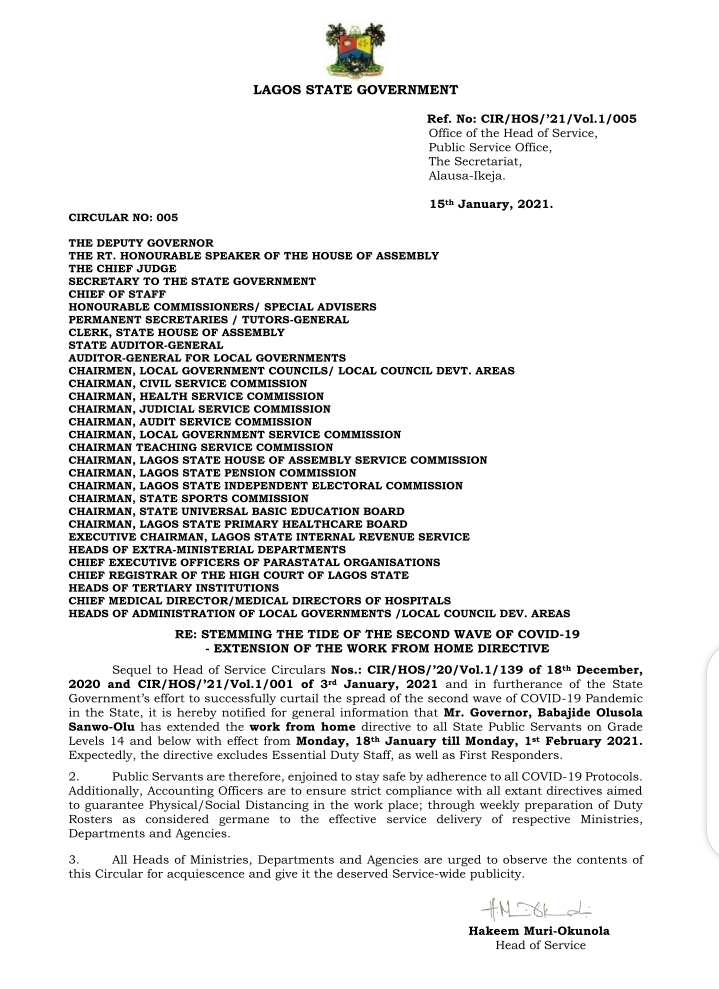