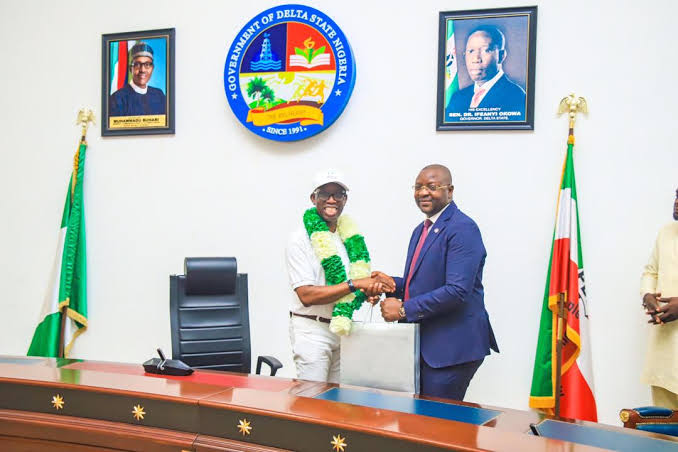 Share
Facebook Twitter LinkedIn Pinterest Email
Nigeria’s 2020 Tokyo Olympics Games build-up has been given a major boost by Delta State Governor, Dr Ifeanyi Okowa who has adopted seven athletes to support their preparations.
This action is another recorded success of the Adopt-an-athlete Initiative championed by the Minister of Youth and Sports Development, Mr Sunday Dare.
Those adopted by the Governor are: Favour Ofili, Blessing Okagbare, Divine Oduduru and Raymond Ekevwo.
Others are: Itshekiri Usheorise, Ogho Oghene Egwero and lately Ese Brume.
With this adoption, the preparations of these athletes for the Olympics Games hit a higher gear as personal expenses like medical, hiring of personal trainer, nutritionist and other related needs will be taken care of.
The Adopt-an-athlete Initiative was created by the Minister of Youth and Sports Development, Mr. Sunday Dare to have individuals, state governments and corporate bodies fund the training of Olympics-bound athletes.
These newly adopted athletes join the league of those that had earlier been adopted by  Lagos, Edo and Ogun State Governors.
Most of those adopted are already part of Team Nigeria camp in the United States.
The money is paid directly into the personal account of the adopted athletes after the signing of an MOU between the athlete and the individual or corporate body adopting.