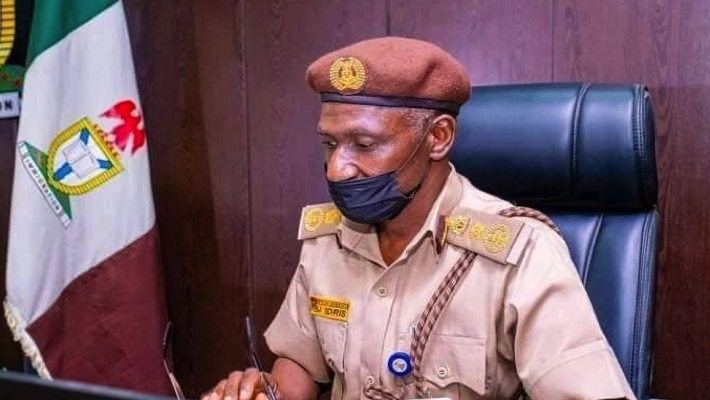 Posted By: The Gazelle NewsIn: NewsNo Comments
Print Email
The Nigeria Immigration Service (NIS) has announced the dismissal of eight of its personnel from the service while 18 others have also been sanctioned for various offences ranging from indiscipline to employment racketeering and other forms of corrupt practices.
This is as a total of 100 of the organisation’s officers and men hitherto attached to the Muritala Muhammed International Airport (MMIA) in Lagos have been redeployed to other units and departments, pending the determination of a recent allegation of bribe against them by a traveller.
The development is contained in a statement issued on Friday morning, 4 November, 2022 and signed by Kenneth Kure, a Chief Superintendent of Immigration at the Public Relations Unit of the NIS.
Kure signed the statement on behalf of the Comptroller General, Isah Idris.
According to the statement, the decision was taken following the approval granted by the Civil Defence, Correctional, Fire and Immigration Services Board (CDCFIB), which reportedly noted that “the conducts of the personnel have remained grossly unbecoming and unacceptable as members of the Service.”
Road to sanction
NIS said the dismissal of the eight concerned officers followed the due process and laid down procedures backed by the law governing the agency.
It said a total of 35 personnel had earlier been presented before both the Senior Disciplinary Committee (SDC) and Orderly Room Trial (ORT) processes “to ascertain their level of culpability in the various allegations of offences against discipline ranging from employment racketeering, sharp practices, dishonest conducts, absent from duty without official leave (AWOL) among others, as preferred against them.”
The statement reads in part: “After exhaustive deliberations by the committees, eight personnel comprising one Chief Superintendent of Immigration (CSI), two Deputy Superintendents of Immigration (DSI), two Assistant Superintendents of Immigration II (ASI2) and three rank and file were summarily dismissed from the Service.
“Furthermore, one other Chief Superintendent of Immigration was ordered to proceed on compulsory retirement while nine other personnel were demoted in rank. They include one Assistant Superintendent of Immigration II (ASI2) who has been demoted to the rank of Inspector of Immigration, two Inspectors who have been reduced in rank to Assistant Inspectors and six (6) other junior personnel who have been ordered to lose their current ranks.
“Meanwhile, nine other personnel comprising one Assistant Superintendent of Immigration II (ASI2) and eight (8) junior personnel were issued warning letters just as six personnel were discharged and acquitted from all the allegations brought against them.”
Redeployed 100 officers
Meanwhile, the agency said a total of 100 of its officers who were working at the MMIA in Lagos until the announcement this morning, have been posted out of the airport with immediate effect.
The statement added that an undisclosed number of some of the affected officers have also been ordered to face disciplinary procedures “to ascertain their level of involvements in some unprofessional conducts and practices reported at the airport recently.”
Earlier in October, a traveller, with the Twitter handle @derby__, narrated her ugly experience at the airport in Lagos, accusing some officials of the agency of extortion and bribery.
The traveller, who displayed the picture of one of the accused in her tweets, said the officers had lied to her that because she was not yet 40 years old, she would not be allowed into the United Arab Emirates.
She said she eventually gave N10,000 bribe to the officers but advised intending young travellers to be wary of the NIS officers at the airport.
In reaction, the agency thanked the complainant for documenting her experience and pledged its commitment to investigating the matter and punish whoever is found guilty.
Sanitising NIS my priority – Idris
Meanwhile, the Comptroller General of Immigration, Mr Idris, has said under his watch, no officer found guilty of any punishable offence would be spared.
Mr Idris, who spoke in a telephone interview with PREMIUM TIMES on Friday, said as the managers of Nigeria’s border the integrity of its officers and men would have significant impact on the image of the nation.
“Whether land or air borders, our men are the first point of contacts, so if they have no integrity then the country is in trouble. So whether in terms of passport production or border management, we will try to instill discipline in our officers and we also plead with Nigerians to stop giving bribes because without givers there would be no takers,” he said.
The Comptroller General restated the commitment of his management to zero tolerance for any unprofessional conducts by any personnel and advises the public to feel free to report any such conducts by any of its officers for necessary actions.
Source: Premium Times