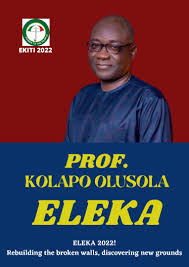 Posted By: The Gazelle NewsIn: News, PoliticsNo Comments
Print Email
Delegates of the People’s Democratic Party PDP in Ekiti state that are loyal to Professor Kolapo Olusola Eleka, have reaffirmed their loyalty to the former deputy governor of the state.
The delegates, under the umbrella of PDP Delegates Forum For Eleka, stated that their alignment and loyalty with the 2018 governorship candidate was borne out of his passion for the state, contributions to the party and loyalty to the cause of the ordinary PDP members.
Chief Oladele Temilade, the convener of the group, who spoke on behalf of his colleagues numbering about 619, appealed to the party leader in Southwest and Governor of Oyo state, Engr Seyi Makinde FNSE, and other party stakeholders to join ranks to deliver Professor Eleka at the main election.
He further stated that his colleagues and himself will never support Engr Segun Oni, due to his inconsistency and betrayal of the party’s trust.
“We stand with Professor Eleka, who we believe has displayed unflinching loyalty to the party and our cause. We equally believe in his vision for Ekiti state.
“Besides, our next preferred candidate is Otunba Bisi Kolawole, the former chairman of the party. The reason for him being second choice is because he is not like some others that are never loyal to the party but always seeking to reap where they did not sow. The person here is Engr Segun Oni.
“We have not forgotten that shortly after his removal as Deputy National Chairman of PDP, Engr Oni dumped PDP for APC where he was rewarded with the party’s Deputy National Chairmanship. He joined forces with the opposition to fight us in 2014 but failed, and also in 2018 oppressive election.
“He remained in APC until he realised that Governor Kayode Fayemi was not ready to support his governorship bid before he defected back to PDP.
“Truth is, we can’t reward such a man with our votes. It will be unfair to other loyal party leaders,” He was quoted as saying.
The group, however, called on Engr Oni to rather support Professor Eleka for the 2022 election in the interest of the people of the state, and wait for his time.

NDDC Gets Commendations For Completed Roads In Rivers